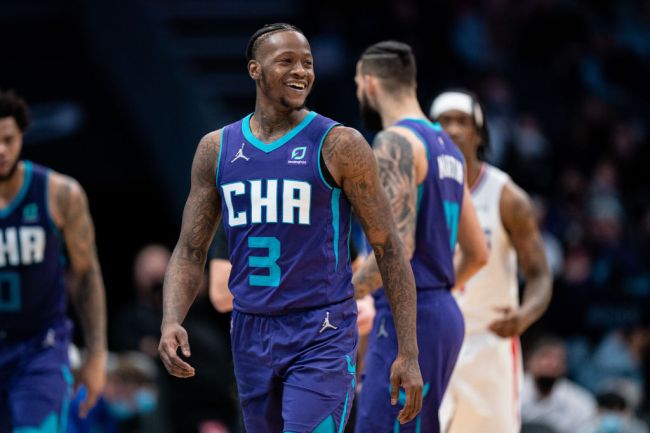 Allowing play to continue after the whistle appears to be a developing trend in the sports world. It was just a few weeks ago that we witnessed the debacle in the Bengals-Raiders game. Now the NBA has had its own strange call after the whistle in last night’s game between the Cleveland Cavaliers and the Charlotte Hornets.

With a little under 5 minutes left, the Hornets missed a 3 and in the scramble for the rebound a Cavs player ended up getting called out of bounds. Then a Hornets player grabs the ball and passes it out to Terry Rozier. Rozier took what everybody thought was a practice 3 after the whistle and then things got weird.

This is amazing. Whistle blows cause ball is out of bounds. Guys takes a deadball practice three. He gets fouled by a guy on the opposing bench. Ref counts the 3 and sends him to the line for 1. All on a dead ball practice 3. Amazing. pic.twitter.com/zUZOJszl6k

In spite of the play being dead, the Hornets were awarded 3 points (even though Rozier missed the 3) and got a technical free throw. It gave the Hornets life after falling behind by 10 late in the game.

After the game was over, the Crew Chief acknowledged that they got the call wrong.

Crew Chief of the Cavs-Hornets game, Brian Forte, says that the three points awarded to the Hornets should not have counted because a ref called out of bounds before the shot. pic.twitter.com/73VDWpqna0

Luckily, the call didn’t end up impacting the outcome of the game as Kevin Love knocked down a pair of free throws after a controversial foul call to give the Cleveland Cavaliers the 102-101 win.