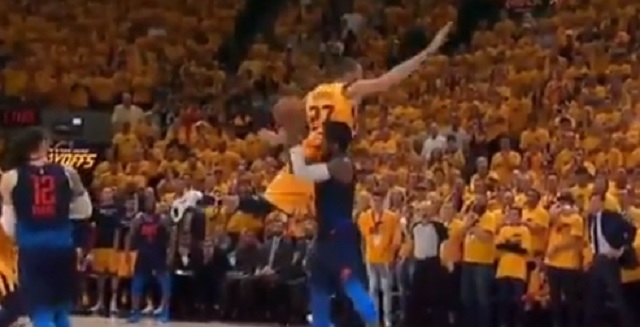 The OKC Thunder season is over after they were eliminated by the Utah Jazz in a contentious game 6 in the opening round of the playoffs. The game ended on a pretty controversial call when the refs didn’t blow the whistle on this Paul George pump fake that would have resulted in three free throws and could have given the Thunder a chance to tie the game with about 15 seconds left in the game.

No foul call on the Jazz..right or wrong call? pic.twitter.com/iaiunbaGNe

After the game was over, a heated Russell Westbrook nearly got into a fight with a Jazz fan for sticking his camera in his face as he was walking off the court.

This was the second time Westbrook got into a heated exchange with a fan. Before halftime Westbrook requested one fan to get kicked out of the game for yelling at him.

LOL Russell Westbrook snapped on this Jazz fan "back the fuck up" pic.twitter.com/nSD7C0Gwqm

The Thunder should have probably been awarded three free throws and we’ll see what the NBA has to say about the play tomorrow.