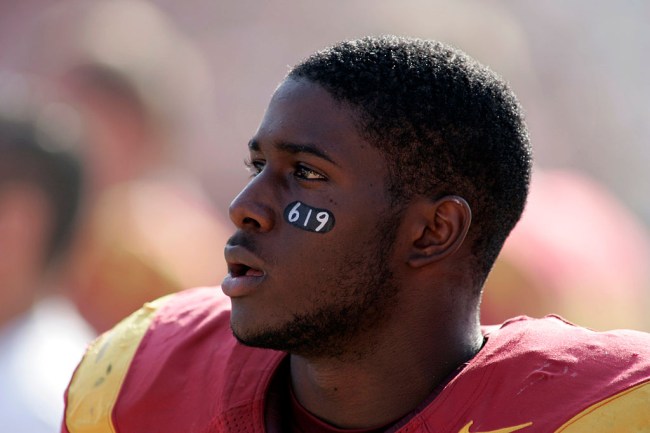 Every once in a while, the college football world is introduced to a player who practically radiates talent and potential and is capable of effortlessly pulling off things on the field that encapsulate the essence of a guy being a dude.

During the 2005 season, there were a couple of athletes who fit that description, including Vince Young, who led an undefeated University of Texas team to the national championship to face off against USC, where he found himself facing a fourth-and-five while down by five with less than 30 seconds left to go in the contest before pulling off one of the clutchest plays you’ll ever see.

It was one hell of a way to cap off an unreal year, and while he was showered in awards, the most sought-after trophy in college football ultimately went to one of the guys he faced off against in that Rose Bowl: Reggie Bush, who received a pretty solid consolation prize in the form of the Heisman.

Bush was picked up by the Saints with the second pick in the 2006 NFL Draft, and even though he certainly fared better than the likes of Jason White, Johnny Manziel, Troy Smith and other Heisman winners from the new millennium who failed to live up to the expectations that come with receiving the honor, he was never as dominant at a professional level as he was during his time in SoCal.

Bush dealt with a steady stream of injuries over the course of his time in the NFL but also suffered a major off-the-field setback shortly after he went pro when rumors started to swirl that he’d received impermissible benefits while in school, which ultimately culminated in him and his family being sued by an agent who gave them over $290,000 in various gifts in an ultimately failed bid to sign the running back.

The NCAA would eventually get involved and dropped the hammer on Bush and his former team in 2010 following a lengthy investigation. He was forced to give back his Heisman and the school had to forfeit over a season’s worth of wins, was banned from participating in bowl games for multiple years, and told it had to act like Bush never existed for a full decade under a “disassociation” order.

In addition to returning its replica of Bush’s Heisman, the school basically scrubbed every reference to him from campus, but according to ESPN, it appears USC is prepared to welcome him back with open arms after the 10-year ban officially ended on Wednesday, which means he can once against visit campus and interact with players and coaches on the Trojans.

The details are still being finalized but I think it’s safe to say the organization that is currently planning on paying players after banning athletes—including Bush—from profiting off their name, image, and likeness for over a century would be wise to give this reinstatement the seal of approval.