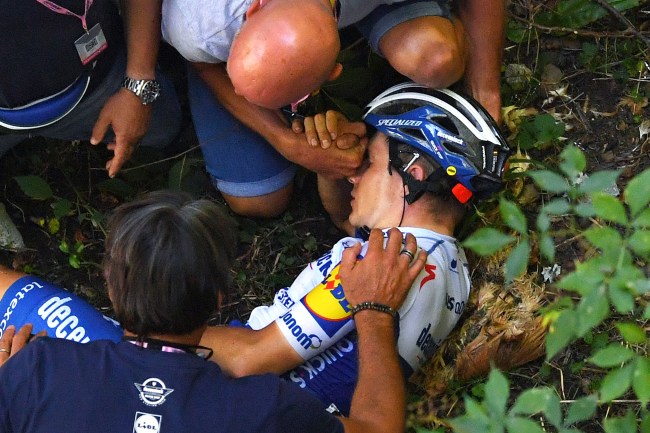 Cyclist Remco Evenepoel is nursing a right lung contusion and a fractured pelvis after falling off an ancient bridge during the Tour of Lombardy race in Italy. The Belgian cyclist was within the homestretch of the race, the final 50 kilometers, when he went over the wall of the bridge during the descent of Muro di Sormano.

He was the race favorite going into the event with 9 wins already this season and he was riding with the leading pack when he careened over the bridge and fell 30-feet down below. He’d already won the Tour of Poland and Volta a Burgos this season but was sidelined with serious injuries after this freak accident.

The Tour of Lombardy race is a 1-day event where cyclists race from Bergamo to Como across some of the most picturesque scenery in northern Italy. It’s not clear what caused him to go over the bridge, a puncture or pothole, but we can clearly see in the aerial footage the moment the rider is sent flying over the wall and down to the ravine below.

After the fall, Remco Evenepoel was placed in an ambulance and taken to a nearby hospital in Como for X-Rays where the discovered the fractured pelvis and lung contusion. He spent the night in the hospital before returning to Belgium the next day to begin his healing and recovery. He gave his fans and followers an update on Instagram yesterday to show that he’s in good spirits after the accident.

This wasn’t the only bizarre accident of the race. Rider Max Schachmann was hit by a car at the end of the race when the vehicle somehow made its way onto the closed road and hit the cyslist while the driver attempted to park their vehicle.