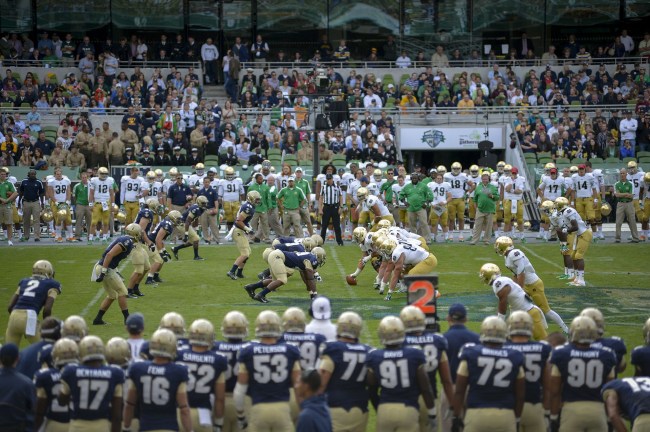 What a weird few days it’s been with the release of the pre-season AP College Football rankings including a bunch of teams that won’t even be playing this season. 13 of the 25 teams in the AP Top 25 aren’t even scheduled to play a game this season!

What we know at the moment is the SEC, ACC, and Big 12 all have plans to move forward with a college football season this year. Notre Dame is playing a full season of ACC games (10 conference games), Notre Dame and the ACC will also share TV revenue from ND’s unique contract with NBC.

Things can change, in theory. Teams that aren’t scheduled to play games could somehow pull it together even if it seems incredibly unlikely and teams that are set to play a full season might call it quits. Everything’s on the table at this point.

We also know the Big Ten was the first conference to announce that the 2020 College Football Season was canceled and the Pac 12 followed with the same announcement shortly after. What happened next is pretty interesting if this article on Sports Illustrated is to be believed. They’re reporting the Big Ten was banking on the ACC canceling and the Big 12 canceling because of the ACC and finally the SEC would cancel because they’d be all alone. The article suggests it was Notre Dame which threw a wrench in the plan and got the ACC to play alongside the SEC which gave the Big 12 confidence to make sure the season happened. Here’s the rundown:

While there wasn’t a uniformed agreement between Power 5 power-brokers, our sources both in Chicago and Ann Arbor said the expectation was that once the Big Ten made its announcement, the Pac 12 would immediately follow (as it did) and then the ACC would follow suit too, putting tremendous pressure on the SEC and Big 12. The Big 12 would go next, and then the SEC, with nothing left to play for, would reluctantly give in.

So why the ACC third? Because many of the universities within the conference are esteemed educational schools, led by the same academic minds that populate the Big Ten. Particularly Duke, North Carolina, Virginia, Georgia Tech and even Florida State (surprisingly, the No. 18 public university nationally) were supposed to be in lockstep with the Big Ten and wield enough power to force the entire ACC into following the Big Ten’s lead. That didn’t happen. And if you’re looking for another reason to hate Notre Dame, now you have it.

“Notre Dame really wanted to play and was willing to enter into an agreement that could lead to something down the road … at the very least, more games every year against ACC teams,” an insider shared. “They’re adamance about playing was the ace-in-the-hole a group, led by Clemson, needed to really push for a season and turn the tide in favor of ignoring the Big Ten. “I mean, if Notre Dame, with their academic reputation and their national brand, was willing to go forward … it sort of just sealed the ACC’s fate.”
(via)

With the SEC and ACC playing the Big 12 was able to forge forward with a season as there would then be a 3/5ths majority of the Power 5 Conferences playing and this left the Big Ten and Pac 12 on the outside wondering what just happened.

The article suggests there is a ton of internal anger in the Big Ten over the missteps and miscalculations that led to their season being canceled while many of the nation’s biggest programs proceeded forward with a season. It’s mere speculation now but I think most people will agree this will all have a MASSIVE effect on college football recruiting. What that effect will be is unclear right now.

They suggest the Big Ten presidents and universities displayed ‘an arrogance’ which had them believing they’d take the moral high ground and look like heroes for placing student’s health above the game of football. Instead, they have tens and tens of millions of college football fans wondering why other teams get to play this season but they aren’t and they’re demanding answers on what these decisions were based on.

To check out the full article on Sports Illustrated, you can click right here to read the inner turmoil that appears to be unfolding right now in the Big Ten.