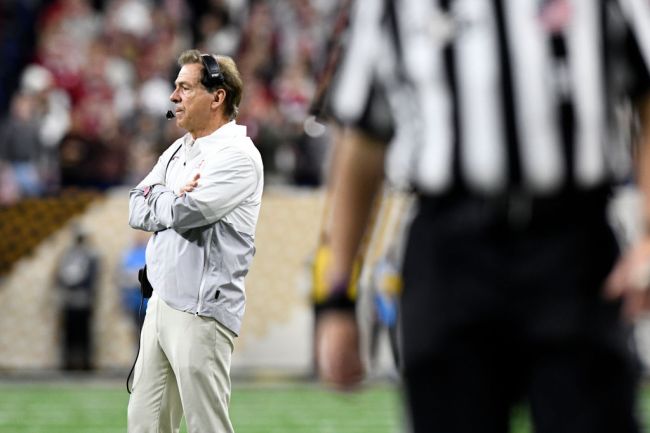 Alabama head coach Nick Saban and Texas A&M head coach Jimbo Fisher were at the center of some college football drama a couple of weeks ago.

Saban sparked the drama when he spoke about how NIL deals impacted Fisher’s incoming recruiting class while talking to some of his boosters. Fisher then called a press conference the following day to vehemently deny that NIL payments had anything to do with his recruiting success and to take some shots at Saban.

Saban would end up apologizing for singling out any programs while talking about NIL, but it seems that hasn’t done much to put an end to the drama. Yesterday, Saban and Fisher were both in attendance at the SEC spring meetings and it seems the two didn’t have much interaction.

According to ESPN’s Paul Finebaum, Saban “treated Jimbo Fisher like a fly on your potato salad at the Memorial Day company picnic.”

"He treated Jimbo Fisher yesterday like a fly on your potato salad at the Memorial Day company picnic. Like shoo, get away." pic.twitter.com/A4bBjDVWZS

That certainly doesn’t make it seem like the drama between these two coaches is going to be coming to an end any time soon. It looks like instead, Saban is going to allow this to be settled on the field.

With everything going on between these two coaches and their programs, Alabama vs Texas A&M on October 8th quickly became one of the most anticipated games on the college football schedule. That should remain the case coming out of these SEC meetings.