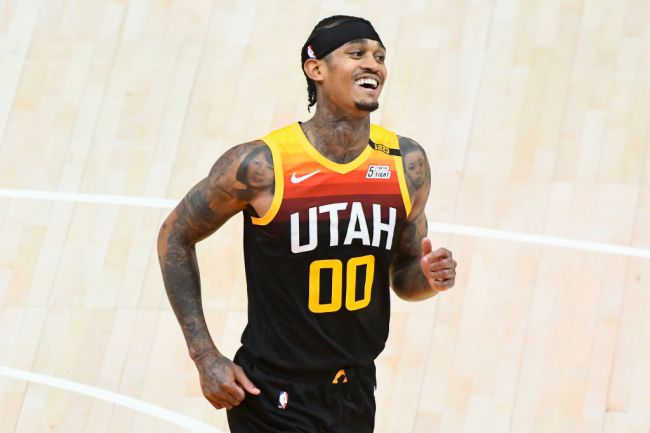 Jordan Clarkson received 65 first-place votes and won the NBA’s Sixth Man of the Year award for the 2020/21 season. He averaged 26.7 minutes, 18.4 points and 4.0 rebounds per game with the Utah Jazz.

And yet, despite his prominence on the court, his play didn’t make him recognizable to everyone in the team’s home city. One local reporter in particular had no idea who he was earlier today.

In their defense — neither of the two appear to be on the sports beat often. I’s still extremely funny.

Man on the Street with Jordan Clarkson.

Vivint Arena and the Jazz recently announced that all home games will require proof of vaccination (or a negative COVID test within 72 hours) for all of its fans in attendance. Cromblehome and Likeness set out to gather reactions from fans with a “Man on the Street” interview.

However, they unknowingly asked more than just the fans.

Welp, pretty sure @rlikness and I just interviewed @JordanClarksons off the street without realizing it was Jordan Clarkson 🤦‍♀️ I have some follow-up questions…

For caption purposes, reporters ask the interviewees for their names and how to spell it. They asked Clarkson to do the same and he is clearly very confused.

Crombleholme proceeded to ask Clarkson if he went to any of the Jazz’s games. Clarkson, straight-faced but still wide-eyed and baffled, hilariously replies “yeah, a lot.”

Had him spell his name and everything 🤦‍♀️. I’m only mildly (okay highly) embarrassed pic.twitter.com/mWFO6eXOjp

After Crombleholme and Likeness realized their mistake, they tweeted at the man who played all 68 games for Utah last season. He laughed it off and took it in stride.

As did the team’s small forward Joe Ingles.

The whole debacle made for an incredible blooper. Surely Crombleholme and the entire KUTV reporter will never make that mistake again. OOPS!