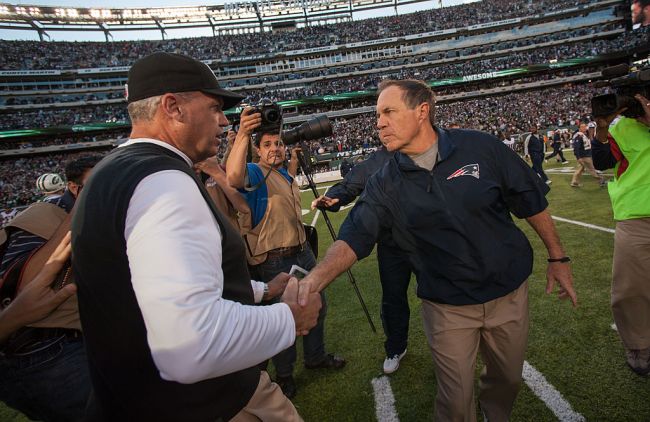 Here’s how depressing it is to be a New York Jets fan: during the 20-or-so years I’ve rooted for the team, the greatest period of sustained success we had was under Rex Ryan about a decade ago.

Now, while Ryan taking shots at Belichick is laughable, it’s perhaps not as preposterous as you may think, as Ryan’s Jets were one of the few teams to have the Patriots number during those early years, going 3-2 against Belichick’s dynasty during his first two seasons in charge of Gang Green. That stretch of victories would be capped with the greatest Jets game I’ve ever experienced — their 28-21 win in Foxboro during the Divisional Round of the 2011 Playoffs.

Still, though, despite my soft spot for Ryan and what be brought to the Jets during those years, I can’t help but roll my eyes at his recent comments about the Patriots and their dynasty, which he vehemently believes to be “flat out over”.

Speaking on ESPN’s Keyshawn, JWill and Zubin show, Ryan was asked if he believed that New England still had a shot of making the playoffs as a Wild Card.

“It’s over, it’s flat out over,” Ryan said on the Patriots making the playoffs. “They’re four games behind Buffalo…They’re not going to a Wild Card. …The playoff run is over and pass the torch to the Buffalo Bills. I think they’re going to be behind Miami when it’s all said and done as well, so we’ll see.

Ryan’s comments would perhaps be more apt if he was speaking about Belichick the general manager, as it’s the Patriots’ lack of top-end talent that seems to be the reason for their current undoing.