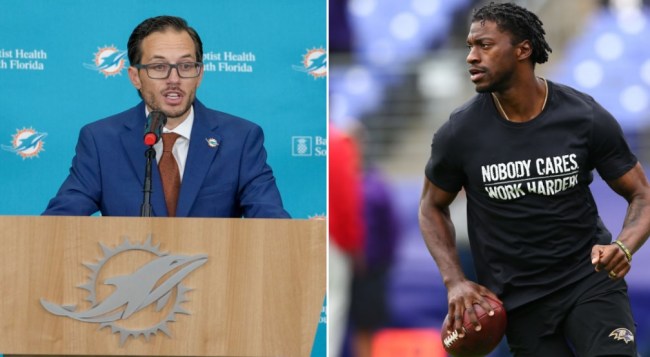 Robert Griffin is showing support for newly hired Miami Dolphins head coach Mike McDaniel, who has found himself at the center of backlash over some comments he made about his racial background during his introductory press conference in Miami.

On Thursday, the biracial McDaniel told the media that he identifies “as a human being” when his racial identity was brought up, which made several people angry.

Mike McDaniel on people talking about his racial background "It's been very odd…I identify as a human being and my dad's black" pic.twitter.com/XRRrNsNsc1

“It’s been very odd, to tell you the truth, this idea of ‘identifying’ as something,” “I think people identify me as something, but I identity as a human being and my dad is Black. So whatever you want to call it, I know there’s a lot of people with a shared experience. It’s weird that it comes up because I’ve just tried to be a good person. And I think my background opens my eyes a little bit. I don’t have any real experience with racism because I think you identify me as something close to — I don’t know. I know my mom experienced it when she married my dad. I know my dad experienced it, that’s in my family. But I guess that makes me a human being that can identify with other people’s problems.”

Why didn’t you identify your Dad as a human being? I’ve never seen human being listed when race is asked on a document or questionnaire. 🙄🙄🙄🙄 https://t.co/zugov57hXj

After the press conference, RG3 took to social media to defend McDaniel.

Mike McDaniel is a mad genius plain and simple. Knows the game. Grew up in it. He is thoughtful & will let that show to his players & the media. He also hates being used as a political ploy for the NFL’s diversity issues just because his Dad is Black. pic.twitter.com/vpesWLJUNC

I have known Mike McDaniel for 10 years. Known his Dad is black for 10 years. Have talked with him about it.
Let the man Coach and stop forcing things on him that he doesn’t want. He understands racism and also understands that he didn’t have to face it because of his appearance