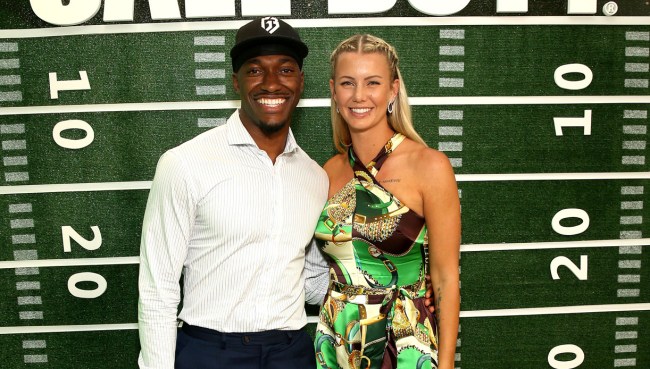 Grete Sadeiko, the wife of former NFL quarterback Robert Griffin III, sees all the ladies trying to hook up with her man on social media and she has a message for them: nice try.

Grete, who rapidly married RG3 after he divorced his college sweetheart wife Rebecca Liddicoat in 2016, knows all about how women try to get their hooks into married professional athletes.

Sadeiko, from Estonia, was a heptathlete at Florida State University when she and RG3 got so close following his marriage’s breakup that he had her name tattooed on his throwing arm.

Recently, the 29-year-old wife of the wife of the current ESPN college football analyst, took to TikTok to put all those “thirsty women” hitting on her husband on blast.

“Thirsty women in my husband’s DM’s not knowing I run his social media,” Grete wrote over a TikTok video of her lip-syncing to the Lady Gaga song Paparazzi.

“The joke’s on you. #GriffinFamily #DM #Thirsty #biggestfan,” read the TikTok video’s description.

“You the best!!!” the former second overall pick wrote in the comments to his wife along with five laughing crying emojis.

“Some women are so unbelievable knowing he’s married. Good for you!! Congrats! Love seeing young couples happy and in love!!!” one fan commented.

“A lot of women embarrass themselves and have no shame,” another wrote.

Fans also had fun commenting about Grete’s TikTok video on Twitter, but they weren’t necessarily as nice.

How is RG3 still a thing? Imagine thinking he needs someone to 'run' his social media.

Hey… he’s got almost 5,000 TikTok followers. Someone’s got to keep track of them.

The couple are currently expecting their third child, fourth for RG3.