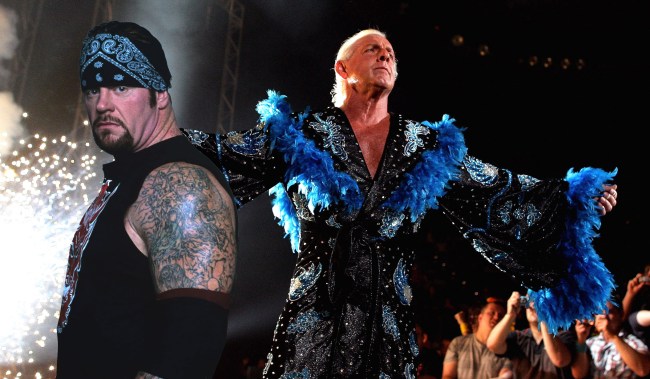 Ric Flair and The Undertaker. A combined 63 years wrestling professionally. And two undisputed legends who don’t know when to quit.

Especially Flair. And we’re not just talking about wrestling. As every fan of his knows, bro didn’t know when to quit with anything back when he was at the height of his powers as a Rolex wearin’, diamond ring wearin’, kiss stealin’, wheelin’ dealin’, limousine ridin’, jet flyin’ son of a gun.

This week as the WWE Network gets ready to release the next episode of the popular Undertaker: The Last Ride documentary, the Nature Boy spoke to Metro and talked about some of his experiences with ‘Taker over the years.

And speaking of Rolexes, Naitch says he lost one of his during a night out drinking with The Dead Man.

“I’ll shoot him a text and joke around,” said Flair. “We didn’t hang around every day but when we’re together know we have fun! [laughs]

“He knew how to get the best out of me! He runs from me now because he knows! I lost a Rolex with ‘Taker one night [laughs].

“Oh God, Horace Grant with the Bulls – every time I see that Last Dance field. Horace has got a brother Harvey who plays for the Bullets.

“We and Taker and Harvey Grant were out one night – and I lost a Rolex, which is a whole different part of the story [laughs]. Trying to hang with him and that Jack Daniels man, it’s tough. We’ve had so much fun!”

Good lord. One cannot begin to fathom the amount of alcohol Ric Flair and The Undertaker consumed on a night out back in the day. Flair alone admitted that he drank 10 beers and five cocktails a day for over 20 years.

As for ‘Taker, last year he appeared on Steve Austin’s Broken Skull Sessions podcast and Stone Cold made him tell the story of how one night he drank rap group Cypress Hill under the table.

As he explained it, after heading back to the hotel one night after a show, with zero intention of doing any drinking Undertaker notices Cypress Hill in the hotel bar.

“I’m being polite, asking them tour questions and all that and then it was like, ‘Okay man I’m gonna head down the road, you know?’ Then I turned around and I heard, ‘Oh man I heard you could party!’ It was like I turned around and said ‘Yeah, I’ve been going pretty good,’ you know,” he told Austin on the show.

“Then somebody else mouthed off and it was like, ‘Okay, I’m staying.’ Somebody smarted off a little, they had no ill will, but it was a moment and that’s how it was sometimes I get, ‘You probably shouldn’t have said that.’

“So here we go and we drank all the whiskey. So we close the bar down and there’s still people standing upright, right?”

“So I don’t know how I ended up, it was me and X-Pac and we ended up in one of the guys’ [from Cypress Hill] rooms and they’re known for their cannabis intake, you know that’s never been my deal, but I remember sitting in this room with people I didn’t really know and there was this haze kinda like the fog had some and sit down at a different level, right?

“I’m sitting at the desk and I’m looking around and there are probably only two people that are upright and there are like bodies laid out everywhere and I turned to say something to X-Pac and X-Pac is asleep on my shoulder, right?

“He went, ‘Oh, okay alright.’ So, I pick him up, the door opens and a big plume of smoke falls out into the hallway, it’s like the gunfight at the OK Corral, believe me, I was feeling it.”

The next day, being the Dead Man, Undertaker gets up the next day and tries to act like nothing’s bothering him.

“We had an early call and I’m telling myself ‘You’re gonna go down there and be cool,’ but my head’s pounding and I go down there and I’m like ‘Hey guys’ and they’re still trying to call guys to get them out of their rooms and I’m just no-selling it.”

Now, can you imagine if social media existed back when Flair and Taker were at their hottest? Oh my.