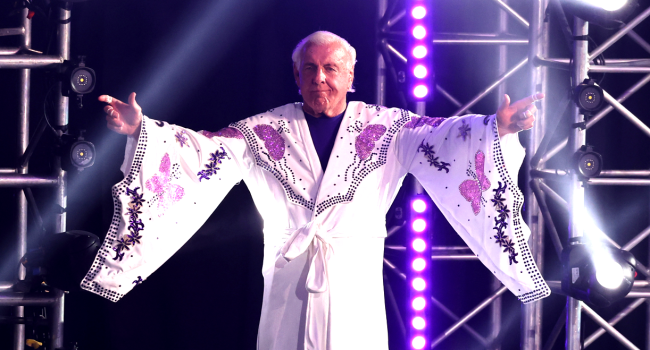 73-year-old Ric Flair is the most decorated professional wrestler of all time. He has won more championships, awards, and accolades during his 50 years in the business than any other wrestling star.

Along the way, The Nature Boy has been involved in a plethora of entrepreneurial ventures, some more successful than others (see Gold’s Gyms, Ric Flair Finance).

I wonder how many people did business with "Ric Flair Finance" because they saw Ric Flair and was like "yeah I wanna be as financially successful as Ric Flair pic.twitter.com/18GgQ12rYE

This week, following what was at the very least his second, if not third (or more), “last” match at Starrcast V, he revealed that his latest venture, Wooooo! Wings, is officially open for business in six United States locations.

Sadly, Wooooo! Wings is a virtual restaurant brand, meaning we don’t get the benefit of seeing just how Ric Flair would decorate an eating establishment (lots of sequins, gold, and a constant stream of Also Sprach Zarathustra piped in for just the right ambiance).

“I love chicken wings and I really love flavors that hit you like a chop to the chest,” Flair said back in June announcing the venture. “To be the man, you’ve got to beat the man, and these championship wings and legendary flavors from Wooooo! Wings are THE MAN!”

Ric Flair fans got their first taste of Wooooo! Wings during the Starrcast V convention this past weekend

“Living legends deserve epic flavors,” commented Mike Jacobs, CEO and Founder of KDS. “We’re thrilled to partner with Ric Flair and his partner, Podcast Heat, to offer this exceptional Delivery-1st dining experience. Created by Mr. Flair with our chef, the Wooooo! Wings menu embodies The Greatest Wrestler of All Time’s passion for his sport and luxurious style in each chef-curated bite. KitchData is proud to have worked with Ric Flair on designing a menu worthy of his name, talent and, most important, his fans.”

The response by fans to Ric Flair’s announcement about the official launch of Wooooo! Wings was pretty comical.

The stylin,profilin,chicken wing frying anything to make a dollar
son of a gun. Woooooooo! ! !

Need one in Michigan, so I can say "and I'm having a hard time holding these Wooooo! Wings down!"

Imagine working in these places and having to hear people screaming “WOOOOOO!!!!” All day

Going to run it like you did Gold's Gym??