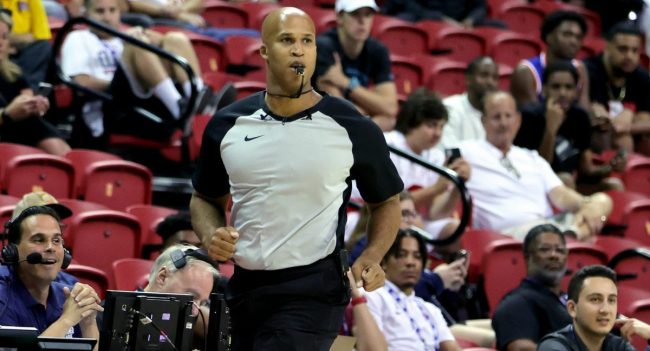 Fans in the crowd at an NBA Summer League game between the Knicks and Trail Blazers gave Richard Jefferson a little jabbing after a missed call in his refereeing debut. Jefferson, a former player turned broadcaster, wanted to see what it was like to be on the other end.

Fans and media are often quick to judge when an official makes the wrong call, particularly when that crucial ruling has an impact on the outcome of the contest. Jefferson said that “not many people would dare to put themselves in this position” and it would help him to be “more informed” as a broadcaster.

Why do this?
1. Tremendous amount of knowledge about our game that I’ve learned sitting in classes with the best refs in the world
2.I do this because not many people would dare put themselves in this position. The more info I have the more informed I am as a broadcaster 🫡

And wouldn’t you know it, Jefferson was put on the spot early in action.

The ball always has a way of finding you, and in Jefferson’s first ever call, he blew it.

.@Rjeff24 changed his first-ever call as an NBA official 😅 pic.twitter.com/F9ffWzUs79

The broadcaster made a call on a loose ball play that went out of bounds. He originally signaled for the Knicks before talking things over with another official.

When the conversation was through, it was white ball, staying put with the Trail Blazers. Fans in attendance absolutely lost it when the call was overturned.

The reaction on social media was pretty funny, too.

Of course, it wasn’t all bad for the former NBAer. He seemed to get the hang of things as the contest continued, even winning that Knicks crowd back over later in action.

In all, it wasn’t a bad refereeing debut for Richard Jefferson even with the overturned call.

Not a bad stat line.

It would actually be nice to see some more folks in Jefferson’s position give it a go on the court. It might help them both learn about the game and be a bit less critical when calls are missed.