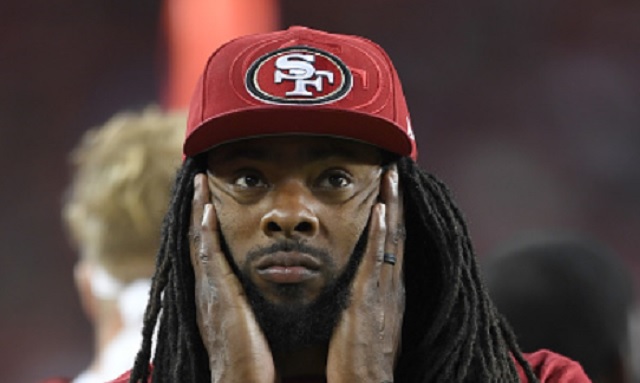 In the offseason, the NFL’s competition committee enacted a new rule that prevents players from leading with their helmets aimed at lowering head injuries.

Here is the exact wording in the NFL’s rulebook.

“It is a foul if a player lowers his head to initiate and make contact with his helmet against an opponent.” The rule applies to all players on the field at all times, and contact does not have to be to an opponent’s head or neck area; lowering the head and initiating contact to an opponent’s torso, hips or lower body is also a penalty (loss of 15 yards).

The new rule has caused plenty of controversy considering that referees have been fairly aggressive in enforcing it during the preseason.

Last night, Niners Raheem Mostert was flagged for unnecessary roughness despite the fact that it appeared that he made a picture perfect tackle on the play.

So here's a play that my 49ers client Raheem Mostert got an unnecessary roughness penalty on last night for leading with his head… Is this really the way we want to affect the outcome of games this season? pic.twitter.com/lotRzIxiue

Here’s a still shot of the tackle made by Mostert.

Doesn’t get any more picture perfect of a tackle then this. Eyes on the ball, crown isn’t straight forward, and goes to the weight and wraps up. Disappointing that the @NFL is choosing to punish good tackles like this. pic.twitter.com/6SwrFPXLK3

Outspoke Niners corner back Richard Sherman took to Twitter this morning to blast the new rules for being “idiotic” and unrealistic.

To all those ppl including those who made the rule. I want a video of YOU running full speed and being lead by anything but your head while also attempting to bring down a moving target. You will soon realize it’s impossible. https://t.co/QFyENU6LKf

There is no “make adjustment” to the way you tackle. Even in a perfect form tackle the body is led by the head. The rule is idiotic And should be dismissed immediately. When you watch rugby players tackle they are still lead by their head. Will be flag football soon.

There is no way to play TACKLE football in a way that makes this rule enforceable. Flag football is the game you are thinking of

This is considered a good Rugby tackle. It would be a for sure penalty in our league. https://t.co/2EqxrKwgCC

Welcome to NFL football. More offense is all they want. That’s why the calls go the way they do.

Can’t say that Sherman is wrong.