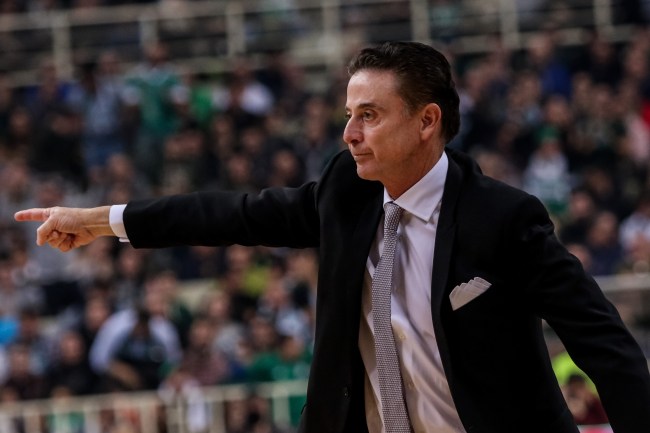 Rick Pitino is a Hall of Fame coach, having won national titles (technically) at both the University of Kentucky and the University of Louisville; although the latter was vacated due to violations. Plus, Pitino has the dubious honor of offering me a piece of gum while watching first-round games of the 2007 NCAA Tournament while I was a senior in college at UK while he was scouting opponents for his Louisville team. I’ve got to think that was the crowning moment of his career, no?

Think is, Rick Pitino is a pretty big slimeball, as evidenced at how he was ousted at the University of Louisville after numerous violations, one of which was the PR nightmare that came with escorts being used to lure basketball recruits to the school, and for the high-profile scandal involving payments to recruit Brian Bowen. None of those incidents were directly tied to Pitino, but the dude has a history, and it could even lead to punishment should he be hired by another college hoops program.

Well, forget all that, because one of the most blue-blooded programs in the country, UCLA, is reportedly considering hiring Rick Pitino for its vacated men’s hoops opening, per Forbes, with billionaire boosters pushing the university to hire the two-time NCAA winning head coach.

Casey Wasserman, a billionaire UCLA alum who was influential in the hiring of Chip Kelly as UCLA’s new football coach, and John Branca, a graduate of the UCLA Law School and an entertainment lawyer who is the co-executor of Michael Jackson’s Estate, both want Pitino, the source said.

“They’re going after Pitino, that’s their No. 1 choice,” the source said.

“Casey Wasserman is the most powerful person at UCLA,” the source added. “He runs everything.”

Meantime, a source close to Pitino said he is “very interested in that job.”

Rick Pitino, 66, is currently coaching Panathinaikos of Greece in the EuroLeague for the rest of the season, but, hey, if UCLA wants him for next year, they may just go out and get him.

Given the news that UCLA is interested in Rick Pitino, Twitter had plenty of reactions. Some praised the idea — like Dick Vitale and and former Kentucky star Rex Chapman — but, generally speaking, the Internet ripped the idea, with plenty of people laughing at the thought of Pitino roaming the sideline in Westwood. Here are some of the best.

TMZ when hearing Rick Pitino might come to UCLA pic.twitter.com/uicG09s4xE

Strippers for everybody at ucla …

Rick Pitino is a slimy scumbag. Casey Wasserman needs to stop pressuring UCLA to hire him.

There won't be a bleach blonde over the age of 35 safe within 100 miles of campus..

Cannot believe you keep saying this. To hire a scandal coach at a historic place is just nuts. UCLA needs to keep a classy coach not one with this baggage

Pitino is a cheater and a fraud. why would UCLA want to hire that garbage?

The Rick Pitino conversation I just had with my UCLA buddy from when we went to school together. I am dying. Make UCLA Great Again!!! pic.twitter.com/ZicsBqzDx4

Time will tell if Rick Pitino actually gets hired as UCLA’s next men’s hoops coach, but given his checkered past, it’d probably be wise for the school to look at someone else with just as high of a profile, but without all the baggage. Just my opinion, though.