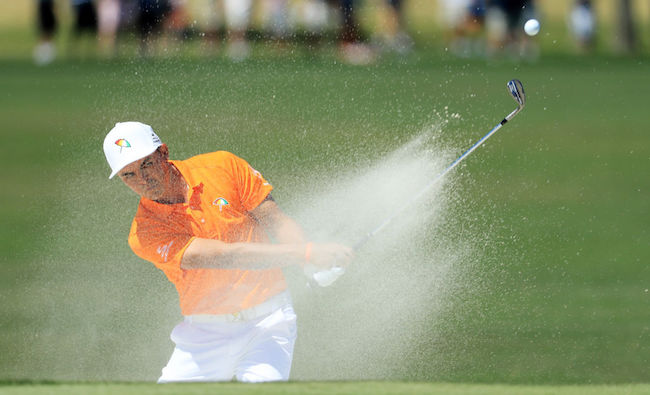 This week, the PGA will travel to Bay Hill for the Arnold Palmer Invitational, where I’m assuming most eyes will be on Tiger Woods after his stellar performance at the Valspar Championship. He’s currently the favorite to come away with the trophy, but as far as I’m concerned, Rickie Fowler has already won the tournament for reasons that have nothing to do with his performance on the course.

To celebrate Palmer’s legacy, Fowler and Puma have teamed up with Arnie’s Army, a charitable organization founded by the golf legend with a focus on giving back to children in need. They’re doing so with a lineup of gear designed specifically for the Invitational, including a pair of golf shoes that can really only be accurately described using a number of flame emoji that I’m sure won’t piss off a single crotchety golf purist out there.

The custom IGNITE Hi-Tops are dotted with Palmer’s trademark umbrella design that’s likely intimately familiar to any fans of Arizona’s interpretation of the golfer’s namesake drink. The strap pays tribute to Palmer’s endless legacy, while the back of each shoe features a message honoring his contributions to the sport. Sadly, only two pairs are being produced— Fowler will rock one while playing this weekend, and fans can enter a raffle to win an autographed pair of the second.

Even if you don’t win the IGNITEs, you still have a chance to score a limited edition pair of PWRADAPTs as well as a snapback featuring Palmer’s silhouette.

In honor of Arnold Palmer’s legendary career, we teamed up with @ArniesArmyCF and @RickieFowler to design and create a series of custom #ArniesArmy shoes and caps that you can win!
Learn more here https://t.co/w3Plfb7dlL pic.twitter.com/HWVEasvvTT