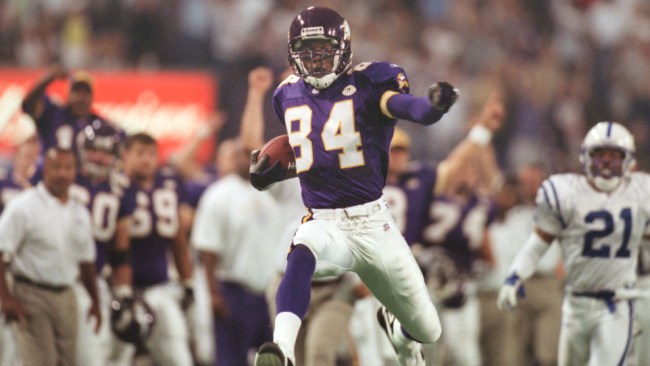 Forty-five years ago, one of the greatest wide receivers of our generation was born in Rand, West Virginia.

Hall of Famer Randy Moss fittingly celebrates his birthday on this Super Bowl Sunday as the world preps to see the Rams take on the Bengals.

The former star played the majority of his NFL career in Minnesota with the Vikings. Those teams of the early 2000s boasted incredible offensive power with Daunte Culpepper, Cris Carter, Robert Smith, and Michael Bennett.

Moss was the best of the bunch.

After being drafted in the first round of the 1998 NFL Draft out of Marshall, Moss went on to play 16 professional seasons. Over that time, the pass catcher hauled in nearly 1,000 receptions totaling 15,292 yards and 156 touchdowns. He also made stops with the Oakland Raiders, Tennessee Titans, New England Patriots, and San Francisco 49ers.

Moss was a six-time Pro Bowler, a four-time All-Pro performer, an Offensive Rookie of the Year, and the 2007 Comeback Player of the Year. He led the NFL in touchdown catches on five separate occasions.

He made such insane plays on the field that the term “Moss’d” became used to describe acrobatic receptions made over opposing defenders. It gained such popularity that it’s now its own TV segment on ESPN broadcasts.

With one more year around the sun complete, analysts, fans, and former players are posting some of Moss’s top catches from his professional playing days. Check some of these ridiculous receptions from the superstar’s NFL career.

9-minute highlight of only his 40+ yard TD catches.pic.twitter.com/EBnxp5wAv0

Moss now acts as an NFL analyst, making appearances on Sunday NFL Countdown and Monday Night Countdown. To celebrate his birthday, he’ll get the gift of watching his son, Thaddeus, play in tonight’s Super Bowl as a member of the Cincinnati Bengals.