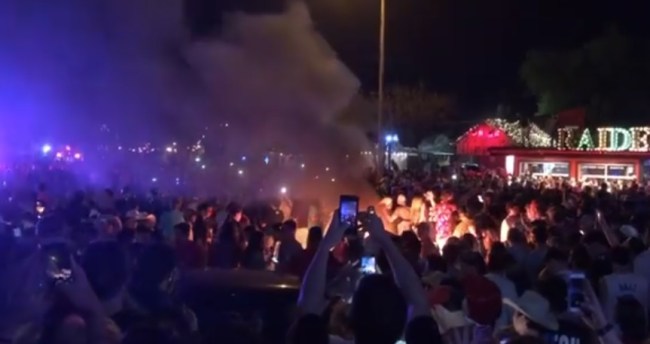 It was a wild scene in Lubbock, Texas after the Red Raiders beat Michigan State in the Final Four of the NCAA tournament to advance to the national championship game on Monday.

After the game, Tech fans in Lubock went crazy and took to the streets to set things on fire.

MORE VIDEO: This is something else on fire on Broadway. 🔥 #TexasTech fans taking it to the extreme. I hope #Lubbock survives. pic.twitter.com/kbJYPdGOxg

Oh yeah there was some car flipping too.

y’all really thought I was kidding when I said lubbock was going to the the purge tonight. WRECK ‘EM. pic.twitter.com/czJhmtv1KU

Another video form @dustyaaron_ of a car being flipped on Broadway St. in Lubbock, Texas. pic.twitter.com/BBNZxgM579

Tech is wilding. But like who’s car is that? 😱😱 #WreckEmTech #Lubbock #Championship pic.twitter.com/0gItVz4Fgq

Eventually police put an end to the festivities by using tear gas to get the crowd to disperse.

LPD is asking people in the Broadway area near Texas Tech to leave. We have multiple officers in the area working to clear the streets.

YALL COPS HAD TO USE TEAR GAS TO CLEAR THIS OUT. LUBBOCK IS LOOSIN IT 🤦🏽‍♀️😂 pic.twitter.com/S5FfGzWJ1i