These Bros River Surfing Epic Waves In Missoula, Montana Are Living The Dream 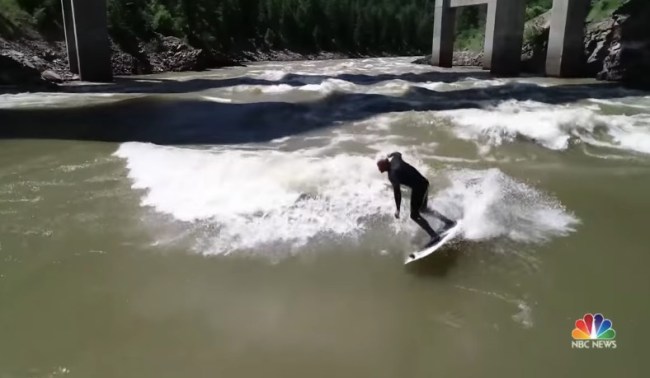 Earlier this week, Surfing became the official sport of the state of California. This makes perfect sense. California gets good waves all year long thanks to the Pacific Ocean and favorable winds. It’s home to some of the best and most famous waves on the planet, from Lower Trestles to The Wedge. Surfing and California makes sense.

You know what doesn’t make a whole lot of sense? I booming surfing community in Missoula, Montana. It’s a landlocked city that is 500 miles from Seattle which is still miles away from the Pacific Coast with any surfable waves.

When you think of Missoula, Montana you might conjure up images of trout fishing rivers and the University of Montana, or maybe you think about the Arizona Diamondbacks’ minor league baseball team.

You likely don’t think about some bros shredding epic waves on the rivers all year long but that’s exactly what is going down in Missoula, Montana these days.

Featured in a profile on NBC Nightly News with Lester Holt, Kevin Benhart Brown is the kingpin of the Missoula surfing community. According to The Inertia, Kevin and his Strongwater Surf brand have ‘blown the doors open’ on the river surfing scene in Missoula over the past few years.

There are rivers everywhere. Why Missoula of all places has river surfing exploded? Well, the local resources make it a prime destination for year-round river surfing.

The Clark Fork River runs right through town and Brennan’s Wave on that river goes off throughout Spring and into early Summer. It’s an easily approachable wave for beginner surfers and one that’s still fun for other surfers.

On Idaho’s Lochsa River just a few miles down the road from Missoula is the aptly named ‘Pipeline’ wave which is said to be one of the absolute best river surfing waves in the country. There’s also another surfable wave in the nearby Alberton Gorge which means that Missoula river surfers have river surfing access 12 months of the year if they can handle the brutal winters.

Here’s that clip from NBC News (via Facebook) which recently aired:

Missoula’s river surfing has been picking up attention for quite some time. This clip from my friends at Great Big Story was set live on YouTube in August of last year and it shows how the river surfing in Missoula isn’t some overnight phenomenon. There’s a real scene building around this:

Who’s down to do some river surfing? Still need more convincing that it’s awesome?

I’ve never been to Montana and I’m absolutely dying to get there and catch some trout. Maybe it’s time to finally pull the trigger and plan a trip for next Spring and tack on an extra day for river surfing in Missoula.