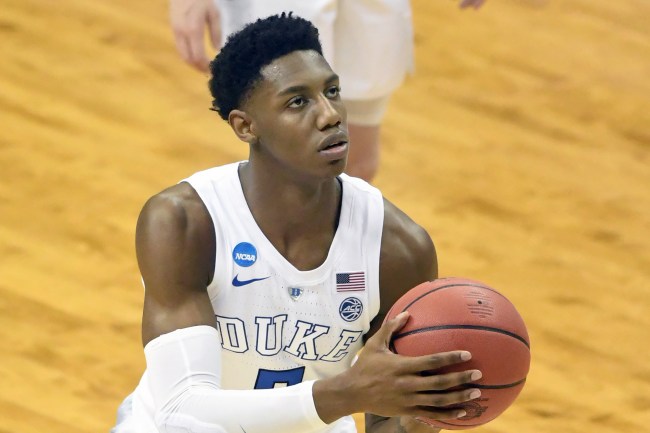 RJ Barrett was a huge reason why the Duke Blue Devils men’s hoops team was one of the best college hoops teams in the country all season long. As a first team All-American who averaged 22.6 points and 7.6 rebounds per game, Barrett joined stud freshman Zion Williamson as one of the top ballers in the country. Problem is, the Dukies’ season ended in the Elite Eight after Michigan State upset them — and RJ Barrett’s missed free throws towards the end of that game was a major reason why.

Although that loss was 1.5 weeks ago, some salty (and jackass) Duke fans aren’t letting RJ Barrett forget that, in their mind, he cost them a chance at a Final Four appearance and, potentially, a national title. That’s because, even after Barrett announced his intentions to forego the rest of his college hoops career and enter the NBA Draft — where he’s projected as a top-three pick — these people are sending A-hole tweets and IG comments to the teenager.

Take a look what RJ Barrett tweeted out today to announce his NBA decision.

I want to thank God, my family, my coaches and everyone that has helped me reach this decision 🙏🏾 pic.twitter.com/z3GwdcV2ht

Pretty solid stuff, thanking the right people and trying not to harm anyone with the announcement. Of course, the Twitter trolls came out and tried to bash him, so scroll down to see some some of the bitterness a few fans are sending to the kid.

Thanks for ruining my bracket asshole

Congrats on missing them free throws!

Pls shoot 1000 jumpers each day til then my brother

This is a right hand. Purchase one with your NBA contract. pic.twitter.com/d0LDzCy4bG

Well now….You know you have to make free throws in the NBA, right? 🤡

Look, I get it, when an athlete “costs you a game” because of a play or two, it’s easy to get pissed off at them and curse them out. Hell, as a Cleveland Cavs fan, seeing JR Smith grab that rebound in Game 1 of the NBA Finals last year and dribble out the clock without knowing the situation still hurts me; but it doesn’t make me hate the dude. Even afterwards, I calmed down after about an hour.

For a few d*ckhead Duke fans to still be going at RJ Barrett 10 days after the Elite Eight loss is just sad. If it weren’t for him, there’s a good chance that Duke wouldn’t have been as dominant to begin with, even with Zion Williamson being an absolute freak of nature.

Instead of celebrating the good stuff Barrett did in a Duke uniform, these sad saps are focusing on one single free throw that he missed, which is pathetic. Maybe they’re not real Duke fans, or maybe they’re really just tools who get off on punking out a teenager online? Either way, here’s to RJ Barrett shutting them up with his play once he gets to the Association, because kid can ball.