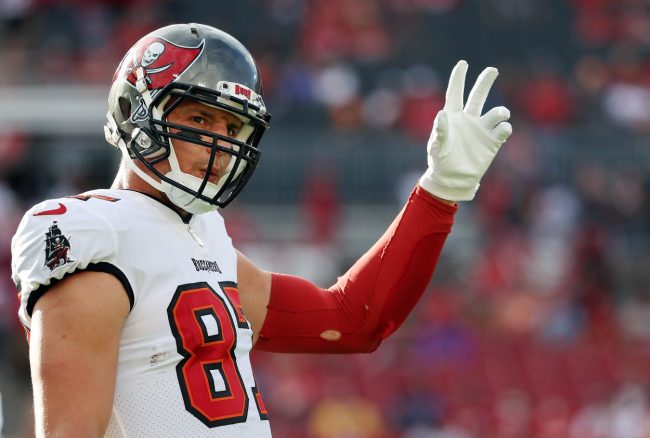 Entering Sunday’s game against the Panthers, Buccaneers tight end Rob Gronkowski had a lot on the line. He needed seven catches and 85 receiving yards to earn a $1 million incentive.

Through the first 53 minutes, Gronk had surpassed the required amount of receiving yards. However, he was still one catch short.

Despite holding a two-touchdown lead over Carolina in a game with no playoff implications, Tom Brady defied his head coach’s wishes for him to sit out the rest of the game. Instead of taking off his helmet and calling it a day, the seven-time Super Bowl champion went back into the game to make sure that he took care of his boy.

Brady refused to come out of the game until Gronkowski caught his seventh ball. Once he did, Brady and Gronk both sat out the remainder of the fourth quarter.

One of the first questions he was asked, of course, was what he plans to do with the money. He said “it’s cool to hit those,” which is the most casual way of addressing a $1 million bonus.

In addition, Gronk shared that he’s going to take care of his teammates because they’re all expecting “a little handout.” The only person he doesn’t plan to take out to dinner, he said with a smirk, is Brady.

Surely they get dinner together enough to where it isn’t a special occasion. Everybody else, including Bruce Arians, is getting a meal on Gronk.