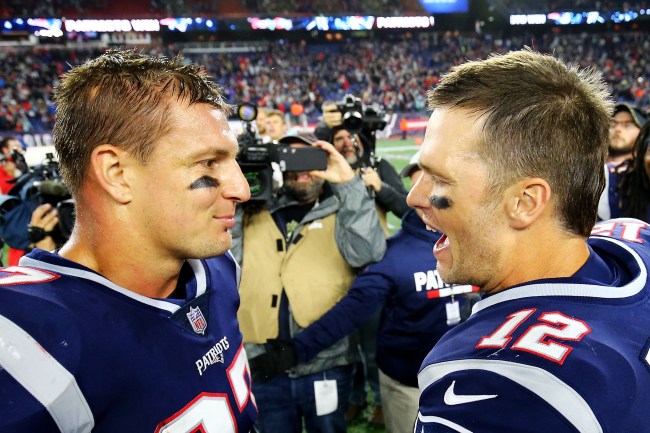 When Rob Gronkowski announced in April that he was ending his one-year retirement and returning to the NFL, it shocked pretty much everyone. The fact that Gronk was coming back to the league to join Tom Brady and the Tampa Bay Buccaneers was an even bigger surprise, with the duo hoping to replicate the success they had together during their time with the New England Patriots — which included three Super Bowl wins.

Who knows what might happen once Brady and Gronkowski take the field this upcoming NFL season, but one thing’s for sure: It should be fun to watch.

A bullish tight end who, arguably, is the best to ever play the position, Rob Gronkowski joins a lethal Buccaneers offense that touts Pro Bowl wideouts Mike Evans and Chris Godwin, which gives Brady weapons he’s never had before in his career. And, considering the GOAT’s the one manning the huddle and tossing the pigskin around, it made Gronk’s decision to comeback to the NFL easy.

Speaking to “Tiki and Tierney” recently, Gronkowski explained how Brady influenced his decision to return to the league — despite the bevy of injuries the tight end referenced as the sole reason for retiring in the first place in 2019. Take a look below at what Gronk had to say about his decision to return.

“I don’t like to spill all the beans, but when Tom went down to Tampa, it just looked like a great situation, a great opportunity,” Gronk told the hosts. “I wasn’t just going to come back out of retirement just to come out of retirement … definitely one of [the factors] was Tom going down to Tampa. That was a big connection.

“To gain chemistry with a quarterback is not an easy task … that’s time you got to put in. That’s a lot of work you got to put it. And we put in work for the last –- before this year –- nine years. We built up major chemistry. I just kind of felt like it was a great situation to continue with Tom if I could.”

“I was feeling healthy. I had that juice going again. When Tom and I talked a little bit and just thought about the situation and how we can pull it off and everything – everything went well. Everything went down as planned and the situations all lined up. I thought it was a great opportunity that I couldn’t pass on. It’s just going to be fun. It’s going to be cool,” said Gronk.

Look, when Tom Brady calls you up and recruits you to play with him, you don’t just hang up without at least giving it some thought. For Rob Gronkowski, he didn’t just feel humbled by the gesture, but he, ultimately, decided that playing with the six-time Super Bowl champ again was too perfect of a situation to pass up — and it sounds as if it were the only scenario in which he would return.

So for all of you Bucs fans, you can go ahead and thank your new quarterback for having quite the influential voice — and the right sales pitch — because, without Brady making that call and influencing Gronk, there’s probably no way in hell the tight end returns to the NFL. Now we’ll just have to wait and see if the product lives up to the hype.