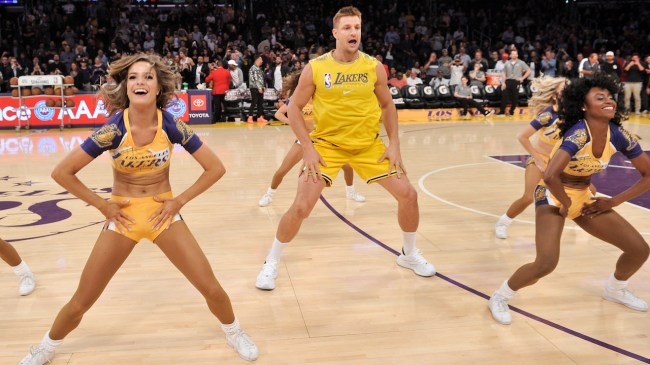 Former New England Patriots tight end Rob Gronkowski is sure having himself a hell of a week.

Yesterday, the future Hall of Fame tight end announced the launch of “Gronk Beach”, which he described as a “personal over the top oceanfront music festival featuring my friend.” Not only was the announcement the official beginning of Gronk’s next venture, but it all but confirmed that he will not be making a dramatic return to the National Football League this season.

Then, later in the evening, in yet another example of Gronk living his best life, the former New England Patriots tight end was seen at Staples Center performing with the Los Angeles Lakers cheerleaders during the halftime show of the Lakers 112-107 victory over Chris Paul and the Oklahoma City Thunder.

Gronk wasn’t alone in breaking it down, though, as he was joined by tennis star Venus Williams and The Late Late Show host James Corden.

Venus WIlliams, James Corden and Gronk all performed during halftime at Staples 😂🕺 pic.twitter.com/oX0BEJ1aVm

Given Corden’s presence, the bit is likely part of some soon-to-be-viral clip for The Late Late Show. Either way, it’s yet another instance of Gronk clearly being over football and being more interested in living his life like a man-child.

And who can blame him? The man — who won multiple Super Bowls during his time in New England — put his body on the line for about a decade and closed out his career as arguably the greatest tight end of all-time? If I had those accomplishments under my belt, you’d certainly find me twerking my ass off with the Lakers girls.