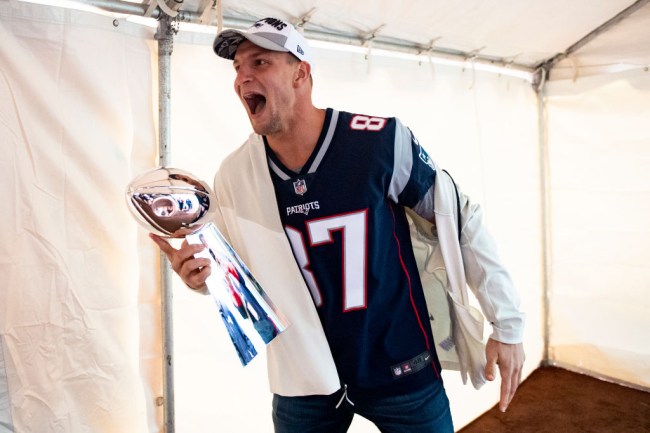 The New England Patriots are currently the favorites to win yet another Super Bowl next season but they’ll be chasing a championship without the help of Rob Gronkowski, who announced his retirement last month after nine seasons with the team.

The news shouldn’t have come as a shock to too many people, as there had been plenty of speculation throughout the season that the injury-plagued tight end would be calling it quits when the latest campaign wrapped up.

Say what you will about the Patriots, but it’s virtually impossible to say anything bad about Gronk, who is a certifiably good guy and managed to provide endless amounts of entertainment over the years both on and off the field, whether he was spiking footballs into oblivion or obsessing over the number 69.

Gronkowski left an indelible mark on the Patriots organization, and while that term is usually used in a figurative sense, it turns out he also did so in a literal one based on a video that was recently released by the team.

Earlier this month, the Patriots helped the Red Sox kick off their season by rolling into Fenway Park with the Lombardi Trophy in tow and Gronk, Julian Edelman, and Stephon Gilmore were all given the chance to throw out a pitch.

Anyone who wants to make sure they don’t follow in the footsteps of 50 Cent knows the importance of warming up before taking to the diamond, so it’s only naturally that Edelman would want to warm up before trotting out to the mound.

However, things went slightly awry when Gronk squared up to bunt the ball with the Lombardi Trophy and promptly discovered sterling silver isn’t as durable as you might expect.

.@RobGronkowski left a mark on this organization.

And on the sixth Lombardi. pic.twitter.com/t5IVTyCXcA

While the dent is apparently fixable, a representative for the Patriots said they’re not planning on repairing the trophy at any point in the near future because it makes for a pretty good story.