Rob Gronkowksi Intentionally Missed A Free Throw To Keep The Score At 69 In High School, And The Gym Went Nuts 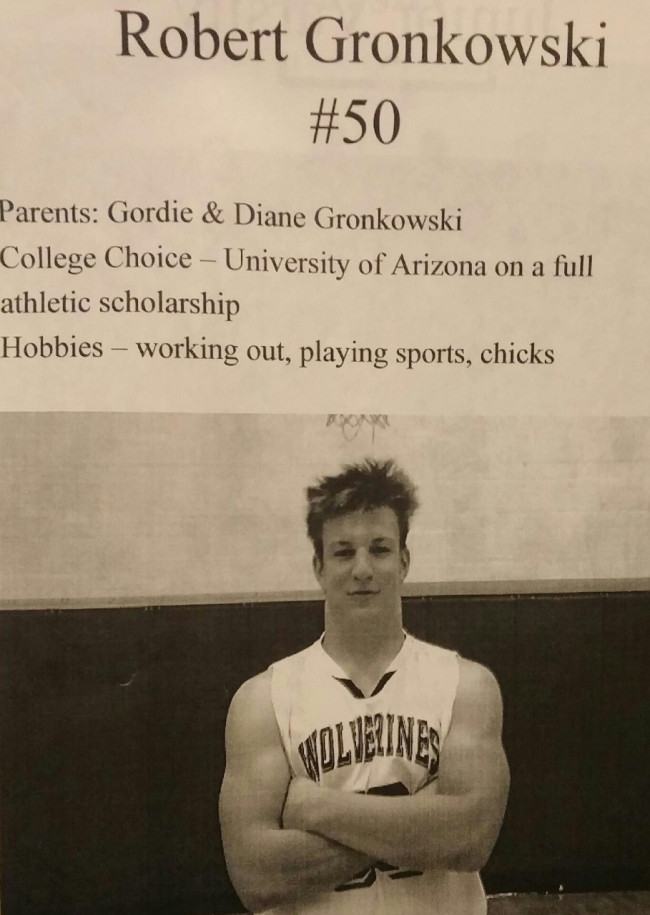 Savage is an overused term, but there is simply no other word that sums up Rob Gronkowski more completely. The dude probably exited the womb with chest hair and a Colt 45. The only high schooler that could get away with baby bird hair like that is a dude who is equal parts charismatic and physically dominant.

And Gronk was the big swingin’ dick at Woodland Hills High School in Pittsburgh when he arrived from Buffalo after his junior year. In a story detailing Gronk’s high school days written by WPRI, teachers, coaches, and students all gravitated toward the future All-Pro tight end.

“He’s a very charismatic guy. The guys loved him. He was a team leader. He had a nice mid-range jump shot and was a beast inside,” said Aaron Tipton, Gronkowski’s basketball coach during his senior year in Pittsburgh.”

Quite possibly the greatest anecdote ever revealed about Gronk is this story about him fixing a basketball game to his liking during his junior year. Says Chuck Swierski, Gronk’s basketball coach at Williamsville North High School in Buffalo, New York:

“So we’re playing a home game and we have 68 points – now it’s not a blowout, but it’s not a particularly close game either. So he [Gronkowski] gets fouled and goes to the free throw line. He hits the first one to get us to 69 and the place goes nuts because he’s playing into it. On his next free throw, he purposely chucks the ball off the backboard and misses so the score would stay at 69 and then runs back on defense pointing at the scoreboard.”

Swierski also praised Gronk’s humility, generosity, and his willingness to reward the people who have helped mold him into the genetic freak he is today.

“I’ve gone to see him in Boston and he has taken us out to dinner,” Swierski said. “One time before a Patriots-Bills game in Buffalo, Gronk was warming up catching passes from Brady. He didn’t know that myself and a couple other of his former coaches were going to be there, but we knew a guy and got down onto the field.”

Swierski continued, “Somewhere along the way he looked to the side and saw us. He immediately pulled himself out of the drill, ran over, slapped us and said, ‘Hey coach! Great to see you, thanks for coming,’ which was something he didn’t have to do. It made me feel – I don’t know if special is the word – appreciated? It was just one of the coolest things.”