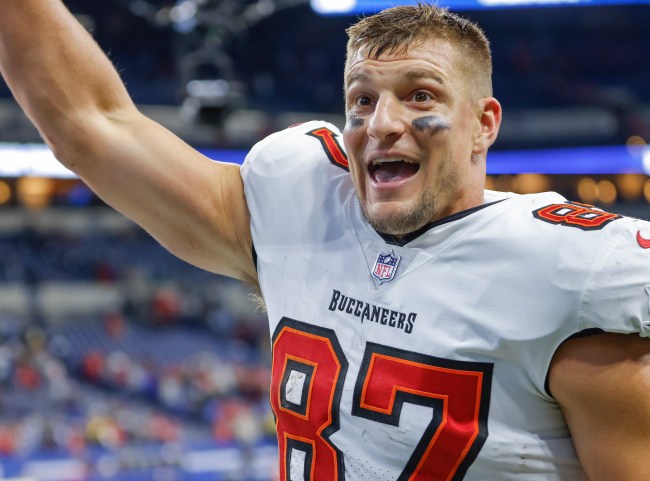 It’s tough out there for Wildcat football fans. The University of Arizona just lost it’s 5th consecutive Territorial Cup to Arizona State and it looks like this loss was costly for Rob Gronkowski.

Buccaneers staff writer Carmen Vitali, a fellow Sun Devil, posted pictures of Gronkowski’s punishment to Twitter today. Thanks to ASU’s 38-15 win on Saturday, Gronk had to roll up to Buccaneer’s practice rocking a Sun Devil t-shirt and carrying a stuffed Sparky.

Before his prolific NFL career, Gronkowski gave Pac-10 defensive coordinators headaches for 2 years as a member of the Arizona Wildcats. He was a 3rd team All-American and 1st team Pac-10 tight end in just his sophomore season after putting up 47 catches for 672 yards and 10 TDs in 10 games.

Gronk also saw quite a bit of success in Territorial Cups during his time with U of A. He scored against ASU in both his freshman and sophomore years, winning one of those games and losing the other. In his sophomore matchup with the Sun Devils, he absolutely lit their defense up. He put up 6 catches for 95 yards to go along with that touchdown en route to a 31-10 win.

The Wildcats even managed to win the rivalry game in his junior year while he was out recovering from back surgery. They haven’t done quite so well in recent years, with last year’s 70-7 loss being their biggest loss in the history of the matchup.

I have to give props to Rob Gronkowski here. Not just for paying up on the bet, but for making it in the first place.The man clearly has a lot of school pride.

So, well done Gronk and, of course, go Devils.