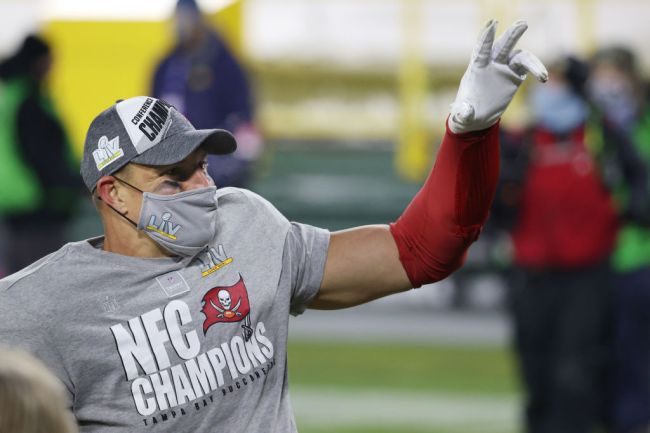 Tampa Bay tight end Rob Gronkowski is never one to shy away from a good time, but the 31-year-old is turning over a new leaf in the later half of his career. After the Buccaneers beat the Packers on Sunday to advance to the Super Bowl, Gronk could be seen dancing in the locker room after the game, but that’s about as hard as he went.

Gronk is living it up in the Bucs locker room 😂

The 10-year NFL veteran made five trips to the Super Bowl with the New England Patriots and won three of them. He came out of retirement this past offseason to join Tom Brady in Florida and will head to his sixth Super Bowl with a win at Lambeau Field on Sunday. His brain is wired to his old habits and he made a funny slip, mixing up his team’s conference on linebacker Devin White’s postgame Instagram.

Gronkowski made an appearance on The Late Late Show With James Corden from the team bus after the dance party and described his celebration, which differed from previous years. He admitted that he went a little bit crazier back then, rather than now.

“The first Super Bowl I went to, I kind of celebrated really hard after the AFC championship game when I still had a game left, you know, practice and everything,” Gronkowski said. “I’m kind of a little, been there and done that now, so I’m going to save it for after the game. Hopefully it goes our way.”

The party primarily involved an extra cheesy burrito this year.

“So we celebrated in the locker room already, and now I just ate my burrito,” Gronkowski said. “Let me tell you, that was my super celebration. I had a burrito and I had it with all the queso possible that I could have.”

His subdued celebration stems from his veteran leadership and still having one game to win, but make no mistake— party Gronk is coming out in full force if the Buccaneers win the Super Bowl.

“I just had a burrito with queso and sour cream, that was my celebration because [we] still got work to do,” Gronkowski said. “And then that’s when the big celebration comes in two more weeks.”

No matter what team fans are rooting for in the big game, surely we can all come together to enjoy the party that would come from Gronk getting another ring. Until then, a burrito will do.