Rob Gronkowski Gives Update On His Thoughts About Retirement 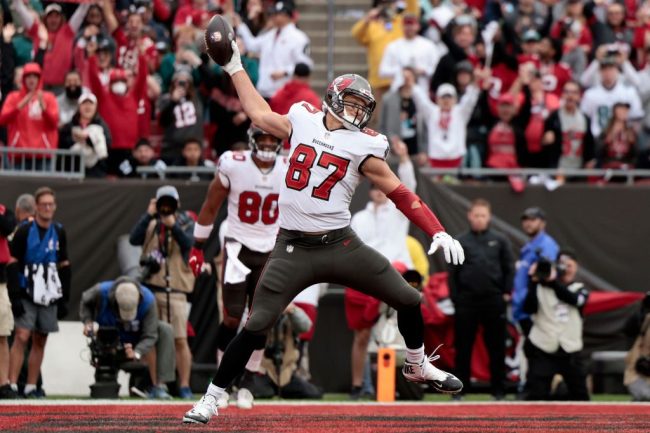 It has only been a few days since the Tampa Bay Buccaneers were eliminated from the NFL playoffs by the LA Rams, but just about every conversation about the team this week has already turned to the topic of retirement.

Obviously, the big talking point is whether or not Tom Brady will retire, but there is another Buc who could have played his last snap on Sunday, Rob Gronkowski.

It’s not the first time Gronk’s retirement is a possibility. Just a couple of seasons ago, the man spent a year away from the game, wrestled in the WWE, and sang and danced in a tiger costume on “The Masked Singer”.

Now, after two years in Tampa, he’s at least giving retirement some thought again. He talked to TMZ Sports about the potential retirement.

“If they’re like, ‘Rob, you’ve got to decide right now, right this second if you’re playing next year,’ I would say no right now. I would be like, ‘No, I’m not playing.'”

While his answer would be no right now, he did make it clear that his answer could change.

“I just want to heal completely, see where my thoughts are from there. Just let things settle down — got to just heal a little bit. Fix all the bumps and bruises.”

Injuries were the deciding factor in Gronk’s first retirement and he dealt with a rib injury for a chunk of this season.

When healthy, Gronk appeared to have plenty left in the tank this season. In 12 regular season games, he racked up 802 yards and 6 touchdowns. That put him at 9286 yards and 92 TDs for his career. He also added 116 yards and a touchdown in the playoffs.

We may have seen the last “Gronk Spike” this year, but hopefully he’ll change his mind once he’s had some time to heal up.