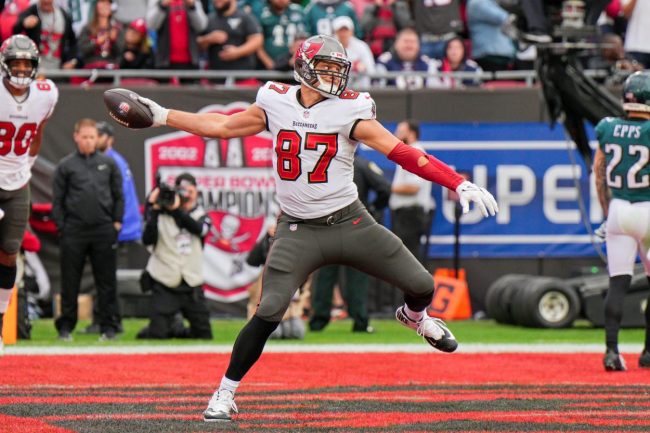 The Buccaneers were significantly limited in terms of offensive weapons during Sunday’s NFC Wild Card game against the Eagles, but they went on to win by 16 in large part due to Tom Brady’s quick decision making. After the game, Rob Gronkowski spoke with the media about Brady’s quick trigger and cracked himself by correcting a reporter over an insignificant number.

Gronk, who is known to have fun in every facet of his life, was asked about whether it makes a difference to be able to rely on Brady’s quick release when the team is down so many players due to various injuries and circumstance. He couldn’t help himself from having a laugh.

Here is how the exchange went down:

REPORTER: “Tom was getting rid of the ball at like 2.16 seconds. That was like some of the fastest stuff he’s ever done—”

GRONK: “Yeah, it was even faster than what you said, yeah.”

The reporter went on to finish her question and the Bucs’ tight end proceeded to answer. However, none of that is important.

Look at the way that Gronk made himself laugh with the quick snap back at the reporter. It’s pure gold.

Imagine not liking Gronk? Nobody has more fun than that guy. pic.twitter.com/tWV8BUL8xt

There are very few people in the NFL, if not all of life, who loves having a good time more than Gronk. Everywhere he goes, the smiles follow— a silly press conference exchange on Sunday being the perfect example.