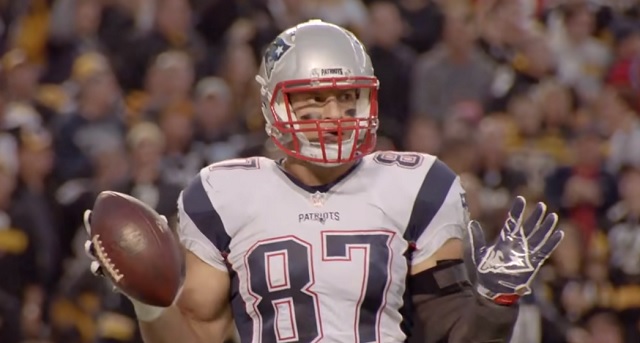 Back in March, former New England Patriots tight end Rob Gronkowski announced that he was retiring from football with a heartfelt Instagram post.

Just a few weeks ago, there was a report indicating that several people within the Patriots organization thought Gronk would consider coming out of retirement to play this season.

The belief is that once the season gets going, and Gronkowski starts missing football, he will rejoin the team. It’s not just a hunch, sources say; you can count on it

On Thursday, Gronk made an appearance at the premiere of Julian Edelman’s new documentary and it doesn’t appear that he’s going to be making an NFL comeback any time soon considering he looks like he’s lost a ton of weight.

Hate to break it to #Patriots fans holding out hope that Gronk will come out of retirement but he looks half the size. Definitely not someone staying at his playing weight. pic.twitter.com/jZcPiL6UcE

Gronk looks like he’s been on a steady diet of bud light and forgetting to eat https://t.co/3XouLwFfLq

Live picture at Gronk waving bye to all the fans that believe a November return is on the table. https://t.co/vwlzIGtPWp

Probably a good chance he’s not coming back. He wouldn’t last 4 quarters at this size. Bye Gronk 😢 #fantasyfootball https://t.co/FXZ8J3u5Pc