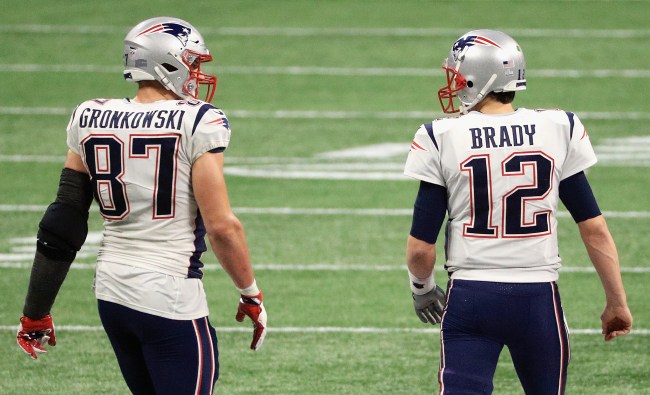 Rob Gronkowski is officially unofficially coming back for the 2019-2020 season, if you just take this one innocuous event, fill in the gaps, project your wants and needs, and pretend Gronk is going to gain back the 45 pounds he lost this offseason to get game-ready. Easy peesy!

With the Patriots heading to training camp in 2.5 weeks, Tom Brady recruited his old buddy to throw to during a private workout Monday on the UCLA campus. Gronk was in Los Angeles to attend the second annual Monster Energy $50K Charity Challenge Celebrity Basketball Game at UCLA’s Pauley Pavilion on Monday night.

It certainly looks like Tom Brady and Gronk were working out at UCLA. pic.twitter.com/AnnQlHgMwt

TMZ Sports caught up with Gronk at the charity event that night and asked him about throwing with the legend he spent nearly a decade with in a professional setting.

“It was great working out. Tom needs someone to throw to so, you know, he calls Mr. Reliable Robbie G the one and only!”

Gronk telling TMZ Sports that he worked Monday with Brady at UCLA:

"It was great working out. Tom needs someone to throw to so, you know, he calls Mr. Reliable Robbie G the one and only!" pic.twitter.com/V2N4Jj86UF

Gronkowski told Rich Eisen last week that he’s enjoying retirement, but there still may be an itch that needs scratching once the season starts up.

“I can’t really say how I’m going to feel about it when the games start rolling around and everything.”

On top of that, sources revealed to Bleacher Report’s Mike Freeman that Gronk’s return is just a matter of time.

“The belief is that once the season gets going, and Gronkowski starts missing football, he will rejoin the team,” Freeman wrote. “It’s not just a hunch, sources say; you can count on it.”

If the Patriots lose to the Jets or Dolphins early in the season, every eye in New England will turn to the greatest tight end to ever play.

My best friend’s sister’s boyfriend’s brother’s girlfriend heard from this guy who knows this kid who’s going with a girl who saw Brady passing to Gronk last night. pic.twitter.com/3njegAmeuU

Brady week 1 Brady week 16
w/o Gronk when Gronk
comes out of
retirement pic.twitter.com/yIs7KcrRDk

Will there be a Gronk return? 🤔