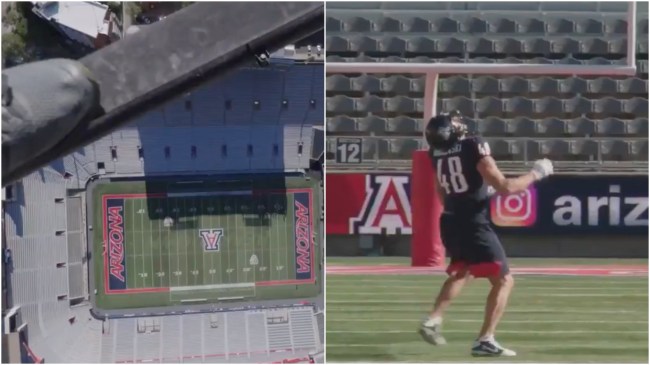 Rob Gronkowski is on a post-season tear lately. The guy certainly knows how to have a good time off the field, whether its hitting the slopes for spring break with Pit Viper and dreaming up brilliant strategies to avoid post-season work outs.

The former Arizona Wildcat and Tampa Bay Buccaneers tight end headed back to Tucson for “the first time in over a decade” for Arizona’s spring game. Gronk is back at his alma mater to be an honorary coach in the scrimmage, coaching a college squad against former Patriots linebacker Tedy Bruschi.

But first, some shenanigans.

On Friday night, Gronk set out to break “the highest altitude catch of an American football” in Arizona stadium. The previous record was set at TCU in 2017 as part of a stunt with Dude Perfect – Tyler Toney caught a ball dropped from 563 feet.

Gronk threw on a navy No. 48 Arizona jersey and took to center field, where a helicopter over the stadium dropped footballs from 600 feet.

It took a couple tries, but the three-time Super Bowl champ managed to best the Dude Perfect guys while the Arizona football team cheered him on.

The reactions from the team in the stadium were absolutely priceless.

Leave it to Gronk to best Dude Perfect at the their own game.

Gronk with another all-time moment!

Rob Gronkowski sets a world record after catching a football dropped by a helicopter 600 feet in the air.

Update on Gronk in Tucson. (Not sure if that’s water or not) 🤔 pic.twitter.com/j21Pqb3TGK