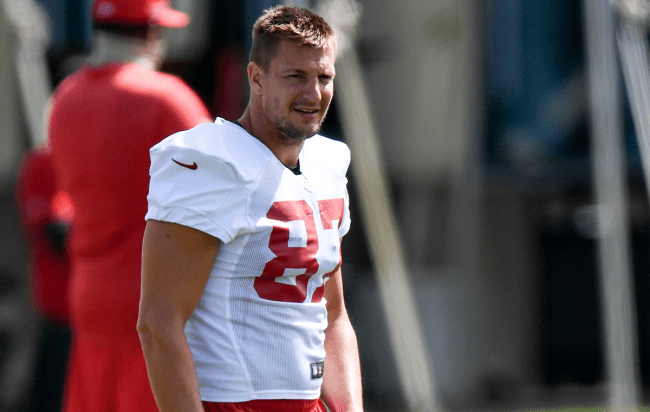 The internet is littered with pictures of famous people emblazoned with quotes they never actually said, including one commonly attributed to Bill Gates concerning an unconventional approach to solving difficult problems: “I choose a lazy person to do a hard job because a lazy person will find an easy way to do it.”

There’s no evidence the Microsoft founder ever actually uttered those words, but based on the countless number of Reddit threads inspired by the quip, there are plenty of examples of people who’ve dreamed up some fairly ingenious productivity hacks—including Rob Gronkowski.

A lot of people like to paint Rob Gronkowski as the epitome of the “dumb jock” stereotype due to his carefree demeanor and signature goofiness, but despite his reputation, the tight end has repeatedly proven he’s not the airheaded bro he’s frequently reduced to.

While his grasp on the intricacies of CTE might leave a bit to be desired, Gronk has wisely chosen to live off of his endorsement deals and set virtually all of the money he’s made playing football aside to ensure he’ll have a nice little nest egg waiting for him whenever he officially retires. However, that’s not the only strategy he’s harnessed to make life a little easier for himself.

Gronkowski cited the physical toll football has taken on his body when explaining why he’d decided to hang up his cleats ahead of what would turn out to be a year-long hiatus, and while he did what he could to stay in shape during his time away from the game, he still had a bit of trouble adjusting when he arrived at training camp last summer.

At the time, Buccaneers coach Bruce Arians suggested Gronk was having trouble adjusting to the Florida heat, but during a chat with reporters on Monday, the tight end revealed one factor that might’ve played a role when it came to preparing for the season. With teams relegated to virtual workouts, Tampa Bay had its players send in videos of themselves to prove they were keeping up with their training regimen, and Gronk realized there was a nice little loophole he was more than happy to take advantage of to avoid doing sprints on a daily basis.

When you consider his performance early in the season left a bit to be desired, I can understand why Gronk might catch some heat for the incredibly on-brand plan he dreamed up. With that said, I’d argue he’s earned the right to do whatever the hell he wants at this point in his career, so I can’t say I blame him.