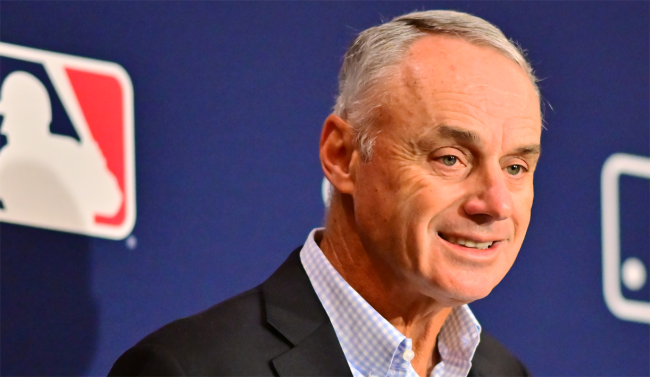 Following the very acrimonious 99 day lockout, Major League Baseball commissioner Rob Manfred knew he had a lot of work to do to repair his relationship with the players.

“One of the things I’m supposed to do is promote a good relationship with our players. I’ve tried to do that,” Manfred said after the lockout ended. “I think I have not been successful in that.”

Sports understatement of the year right there.

“I think that it begins with small steps,” he continued. “It’s why I picked the phone up after the (Collective Bargaining Agreement) ratification and called Tony (Clark) and expressed my desire to work with him. It’s going to be a priority of mine moving forward to try to make good on the commitment I made to him on the phone.”

Apparently one of those (very) small steps Manfred had in mind was leaving a gift in each players’ locker on Opening Day along with a note.

“As we get ready to start a new season, I wanted to take a moment to send a note of appreciation,” the note from Manfred read. “Being a Major Leaguer is an extraordinary accomplishment that beyond your remarkable talent shows your dedication to this great game. Along with our clubs, I’m committed to working together with all players to grow the sport. I’m excited about the opportunities that lie ahead and by working together, I know we can bring the game to new heights.

“Please accept this gift as a small gesture of my appreciation for the hard work that comes with being a Major Leaguer and your respect for our incredible fans.”

The (very) small gesture was a pair of Bose headphones.

Rob Manfred has said he needs to repair his relationship with MLB players following the lockout. Here’s a small gesture from Opening Day. Each player had a gift box waiting at their locker with Bose headphones and this “note of appreciation” from Manfred inside. pic.twitter.com/kxHnGcoaQT

For those asking: No, minor leaguers did not receive a gift box. They'll have to buy their own Boses.

Fans had a field day upon learning that Rob Manfred gave a bunch of millionaire baseball players a set of headphones in an effort to make things better.

That's the gift that keeps on giving. pic.twitter.com/VvKZzylr2T

All those things I said and meant about wanting to surpress your pay? Forget about them. Here are some headphones and an apology note someone on my staff wrote.

When your boss orders pizza for the office instead of giving everyone a raise. Then thinks everything is great with his staff.

They can’t hear you laughing though because of the noise cancelation! Pretty clever guy Mr Manfred #chessnotcheckers