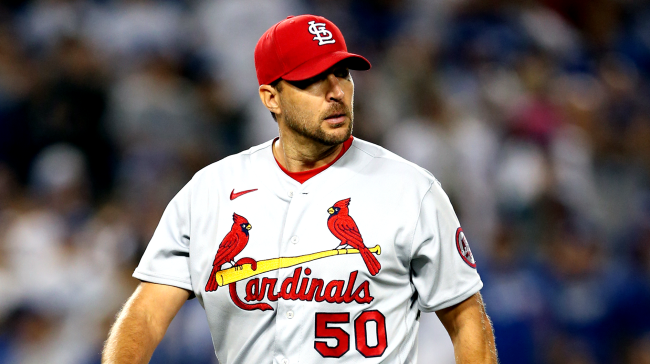 St. Louis Cardinals pitcher Adam Wainwright has been playing professional baseball since the year 2000 when he was selected 29th overall in the first round of the Major League Baseball draft by the Atlanta Braves.

He has led the National League multiple times in wins, innings pitched, and games started. He has also saved the series-clinching games of both the 2006 National League Championship Series and World Series.

So he’s seen some things. And in the case of Major League Baseball commissioner Rob Manfred, he sounds like he has seen enough.

The 40-year-old, who is entering his 17th year in Major League Baseball, is long past really giving a damn about politics in baseball.

Following the conclusion of the 99 day players lockout, Rob Manfred said he was going to have to repair his relationship with the players.

“One of the things that I’m supposed to do is promote a good relationship with our players,” Manfred said at a news conference announcing the end of the lockout. “I’ve tried to do that. I think that I have not been successful in that. I think that it begins with small steps. It’s why I picked the phone up after the ratification and called Tony and expressed my desire to work with him. It’s gonna be a priority of mine moving forward to try to make good on the commitment I made to him on the phone.”

Related: Ken Griffey Jr. Will Be The Sixth Highest Paid Player For The Reds In 2022: Fans React

This week, several players were asked about Manfred’s statement and what the MLB commissioner can do to mend those fences.

“To just put it bluntly, he doesn’t do anything for us,” Wainwright told ABC News. “I know how that’s going to read, so commissioner Manfred, don’t take it personal. That’s just how it looks from a players’ standpoint.”

Perhaps Rob Manfred could start with not flippantly referring to the World Series trophy as “a piece of metal.” But I’m just spitballing here.

“I think for me it’s just more positivity toward the game and players, and that’s really it,” said Britton.

“Maybe just all the comments and stuff,” replied Tyler Glasnow. “I’d say there was a lot of anger toward, like, the ‘piece of metal.’ There are small things like that.”

Then again, maybe I wasn’t so far off.

“I don’t think the Lombardi Trophy is a joke to anyone, or whatever they call the NBA trophy, or the Stanley Cup,” said Tampa Bay Rays outfielder Kevin Kiermaier. “That’s not a joke to those guys. I don’t hear their commissioners saying stuff like that.”

Kiermaier also added, “We didn’t get a deal done two weeks ago, and he’s like kind of laughing or smiling. I didn’t think anything was funny or comical about what happened.”

Don’t forget about Manfred practicing his golf swing during labor negotiations. That was also a pretty bad look for a guy who is supposed to be promoting the game.