MLB To Allow Advertising On Jerseys And Helmets: Fans Have Comical, Angry Reactions 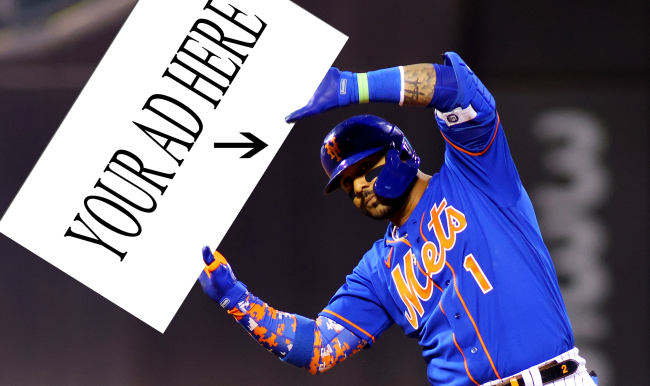 Major League Baseball’s owners and players finally came to an agreement on Thursday that will see the regular season get underway on April 7th.

As a result of the 99 day lockout and the negotiations that took place there will be numerous changes to the game in 2022. One of those changes will be the addition of advertising on the players’ uniforms and helmets.

Other changes that will be made include a universal designated hitter, the banning of shifts in the infield, implementing a pitch clock, a 12-team postseason, the top two division winners earning first round playoff byes, and in 2023, MLB will be making the size of the bases larger.

“One of the good things about collective bargaining is that it gives our players an opportunity to have input on what their workplace in the game is gonna look like going forward. And they took full opportunity to provide that input during these negotiations. Our players are great, great athletes. I respect them, and I respect the input that we’ve received from them during this process. And we really did learn a lot.”

Did they? Did they really?

Several of these new changes have already been mocked widely by baseball fans. Not necessarily because they are bad ideas, but because Major League Baseball has just made it so easy for fans to mock it.

So…..a visual representation of what the larger bases will look like, brought to you by Rickey Henderson! 🤣 https://t.co/XyktbkpulS pic.twitter.com/uCWD5QLt67

If Ricky Henderson would’ve became the all time stolen base king in the year 2033 #MLB #mlblockout pic.twitter.com/uQmx0FzVSx

Baseball fans are now equally having fun with the fact that Major League Baseball will now be allowing advertising on jerseys with patches and helmets with decals.

Re the MLB agreement, this was the first thing that came to mind when I read an ESPN report saying, "Player uniforms will feature advertising for the first time, with patches on jerseys and decals on batting helmets." pic.twitter.com/6P6ESn6bnx

What company's logo would you want to see on the Dodgers uniforms if MLB had advertising patches? pic.twitter.com/k69xC9sSF4

@MLB If you all go to uniform and helmet advertising, I am truly done with baseball and the greed. Talk about ruining the game. You have done a really good job of that already, this will be the death blow for baseball. You are gonna lose ALOT of fans. @MLBPA take note as well.

Can’t wait to see the uniform advertising MLB teams whip up with their partners in gambling, dick pills, and crypto

Advertising on uniforms? Are we serious? Is this friggin' soccer? I don't ever want to hear about "integrity of the game" from MLB again. I do not want uniforms soiled by walking billboards nor the playing field to turn into Times Square. (5/10)

“For the first time in MLB history, the league's player uniforms will reportedly feature advertising.” I’m out – #FireManfred

Wtf, advertising on uniforms?! MLB has just jumped the shark.