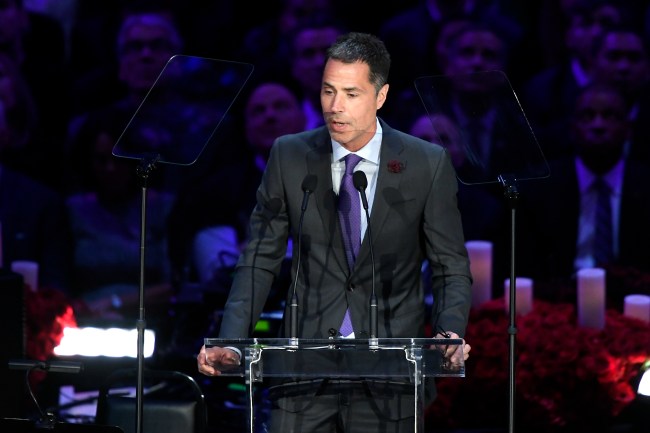 Lakers GM Rob Pelinka was one of Kobe Bryant’s best friends and was in contact with Kobe on the morning the basketball great died in a helicopter crash last month.

During Kobe’s farewell celebration Pelinka revealed that Kobe was texting him while on the helicopter on that tragic morning moments before his death to see if Rob could help him get a baseball agency internship for Lexi Altobelli. Lexi’s parents and her sister Alyssa were on board the helicopter the day of the crash.

Rob Pelinka says Kobe texted him when he was in the helicopter about helping the daughter of one of the deceased in getting a good baseball agent…oh man😖😖
pic.twitter.com/rRod4FBICW

“It was just passed 9:30 Kobe texts back explaining his desire a friend of his secure a baseball agent internships for one of his young daughters. Kobe vouched for the girl’s character, intellect and work ethic. He clearly wanted to champion a bright future for her.

I text Kobe right back and said I would put a plan in motion to get that done, a handful of minutes later Kobe, Gianna, and seven other beautiful souls ascended into heaven.

Kobe had been texting me from the helicopter, the girl in that text chain that he wanted to help so badly was Lexi Altobelli, the surviving daughter of coach John Altobelli who was also on the helicopter. Kobe’s last human act was heroic, he wanted to use his platform to shape a young girl’s future”

So deep. Kobe spent some of his last minutes on earth trying to help a young lady get a internship. He was texting from the helicopter with his best friend and top Laker’s exec Rob Pelinka.

Kobe final text he sent was trying help someone else. He was really different bro

One of the last text messages Kobe Bryant sent, was a message to Rob Pelinka asking for a baseball agent. Moments later, the helicopter crashed.

That hits so hard to hear. A final act was just wanting to help a little girl get an internship.