Rob Riggle Discusses Why It’s Hard For Him To Go Tailgating, The Best Uniforms In College Football, And More 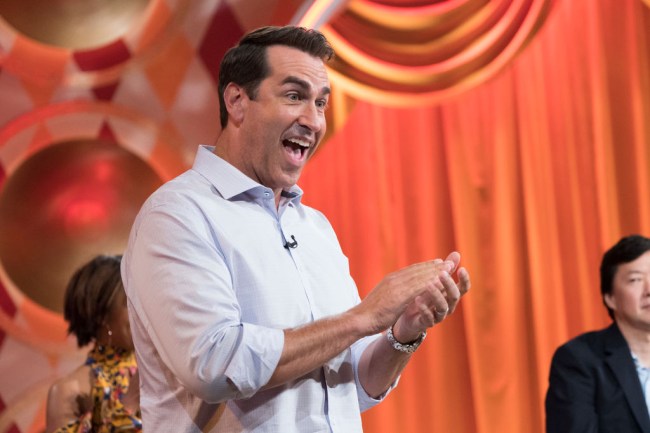 What’s up, bros? So, last week I had the chance to catch up with Rob Riggle. I found out that Rob Riggle’s a lot more than just an actor, comedian, and U.S. Marine, he’s also a massive College Football fan. Rob and I spoke about the best rivalries in College Football, the best uniforms, and I even blindsided him with a question about the Catalina Wine Mixer (interview below).

This year, Rob has teamed up with Dos Equis for something special. Dos Equis is well known for their ‘Most Interesting Man in the World’ spokesman, and it’s also the official beer of the College Football Playoff. Rob Riggle’s teamed up with Dos Equis to become their College Football spokesman, and together they’re rolling out the #MostInterestingFanSearch campaign. You, me, Rob Riggle, and anyone else alive has the chance to be inducted into the College Football Hall of Fame with a statue by hopping on Instagram or Twitter and using the hashtag #MostInterestingFanSearch. This starts on Week one of the 2017/2018 College Football season (September 2nd) and runs through the last week of games. All you have to do to have a shot at being in the HoF forever is upload a video of why you are the most interesting fan in all of College Football to Twitter, Instagram, or DosEquis.com, use the hashtag, and this is 100% legit. Now, before I get too sidetracked, let’s jump right into the Interview.

Cass from BroBible: I did a little stalking on your Wikipedia page and saw that you graduated from the University of Kansas in ’92.

Rob Riggle with Dos Equis: Wikipedia, you gotta tread lightly with Wikipedia. I’ve seen them post weird stuff on there and it can be bizarre, I dunno, let’s validate everything you read.

Cass: So what I read was that you graduated from KU in ’92, which was a huge year for the Jayhawks. They won the Aloha Bowl, their first Bowl Game win in 31 years. Had you always been a College Football fan or did you come to this in college?

Rob Riggle: Oh yeah, I grew up in Overland Park, Kansas and my mom and sister went to KU, and my grandparents lived next to Missouri. So I used to go to a lot of Missouri games believe it or not, and I went to a lot of Kansas games growing up. I knew their rivalry well. But yeah, when I got to KU we weren’t considered the best football team. As a matter of fact, they said when K.State played KU it was considered the ‘toilet bowl’. And then within a short amount of time Glen Mason came in and turned our program around and we ended up winning the Aloha Bowl, decisively, it was something like 52 to 17 (***by the way, I fact checked this and the Jayhawks won the Alohal bowl 51-30 in 1995, but they won the Aloha Bowl 23-20 in 1992). It was a big win, pretty cool for a team that wasn’t used to winning. 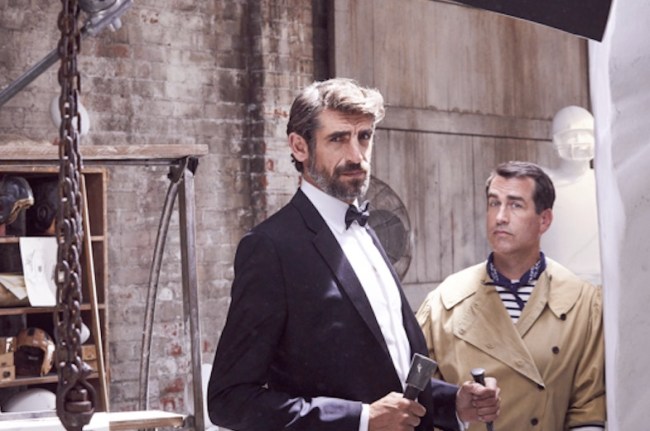 Cass: So that’s interesting that you had the family rivalry between KU and Missouri because I was wondering if you have a favorite rivalry in College Sports?

Rob Riggle: Kansas-Missouri used to be one of the best. It was the oldest rivalry west of the Mississippi and it was deep, I mean it went all the way back to the Civil War, I could go on, don’t get me started. The Missouri-Kansas rivalry was outstanding. Or course, then they (Missouri) left our conference and that’s now over. But, obviously, Ohio State-Michigan is a big one. Notre Dame and whoever they play is going to be a huge one…I like the Service Schools. I like watching Navy and Army and Air Force.

Cass: Okay, I was going to ask you. As a Marine, who do you typically root for in the Army-Navy game?

Rob Riggle: Navy. We are a part of the Navy.

Cass: Now I’m going to just start throwing some random questions out there…If you had to go to a bachelor party in Las Vegas, who is going to be the more fun coach to party with, Jim Harbaugh or Lane Kiffin?

Rob Riggle: Oh boy, probably Lane. Are we talking about getting in trouble?

Cass: Who has the best uniforms in all of College Football?

Rob Riggle: You mean besides the Jayhawks? The classics are Michigan with their helmets. Notre Dame with their helmets. USC is pretty great. I like the simplicity of Alabama and Penn State. And Oregon, they always put on a show. Who knows what they’re going to show up in? I guess it just depends if you’re a traditionalist or if you like the new stuff.

Cass: So you’re working with Dos Equis as the spokesman for the College Football Playoff and on the #MostInterestingFanSearch, what four teams do you see making it this year?

Cass: This question isn’t entirely College Football related, this is just a question that I was curious about. So you know this very well, obviously, one of your most popular movie lines was ‘POW!’ from the Catalina Wine Mixer in ‘Step Brothers’. Are you able to go to a tailgate without people asking you to say ‘POW!’ and does that get old over time? 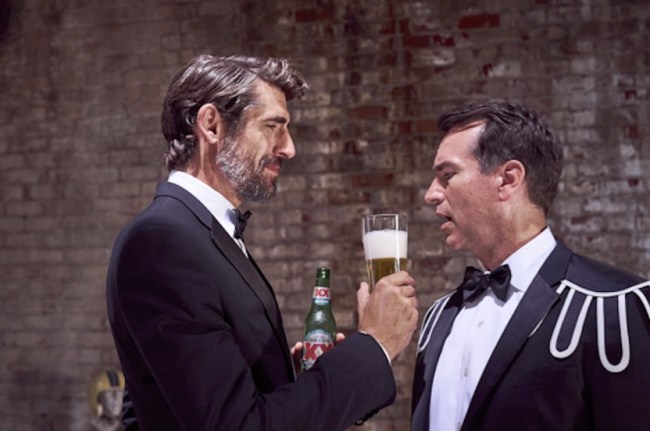 Cass: if you were able to travel back in time to any era, is there a coach or team that you’d most like to play College Football for?

Rob Riggle: Hahahahaha, ohhhh, I mean, yeah, you’re talking about Knute Rockne or Bear Bryant. That would be pretty amazing. Eddie Robinson at Grambling. All of those folks, I would go back and play for all of those folks. I’d go back and play for (Mark) Mangino at KU. 2008 at the Orange Bowl. Did I mention that? That they went 12-1 and beat Virginia Tech? I don’t know if I mentioned that, that’s just a little Jayhawk trivia for you.

Cass: So, my last question is ‘why is FSU going to win the National Championship this year?’

Rob Riggle: OH SNAP. Now we’re getting down to it. A hidden Seminole. I actually used to be stationed in Pensacola and I used to drive down to Tallahassee on game days. We were young Lieutenants and we had nothing to do on the weekends except study flanks, and we didn’t do that, we went to Tallahassee and went to Florida State games. It was back in the early 90’s when you guys were red hot. This was back in ’93 when you guys were National Champions. We were around there at that time, and that is a cool environment to go watch a game. So, I wish you luck. You guys could definitely win the thing this year.

And before I let you go, you gotta let people know that if they’re going to do this contest the #MostInterestingFanSearch ‘Stay Thirsty’ contest, they can actually get in the College Football Hall of Fame. If they win this contest they get their actual statue put in the College Football Hall of Fame, for real, and all you have to do is submit your story of why you are the greatest fan in College Football in America. You can do it on Instagram or Twitter with the hashtag #MostInterestingFanSearch. People are submitting their stories, telling us why they should win. I am in the competition as well just so you know, and I am going to try to win. This is not a joke, I am going to try to win.

Cass: Do we know anything about the statue itself that will go into the HoF?

Rob Riggle: That statue itself is going to be a full-blown statue, I assume some sort of metal. Bronze perhaps. That’s what I’ll request when I win. Somebody with talent greater than mine will be making this thing. But it’s for real. This statue goes into the College Football Hall of Fame in perpetuity as far as I understand. It may get put in the bathroom eventually but it’s going to be there in the HoF forever.

….Rob ends the interview by humming the Seminole War Chant… 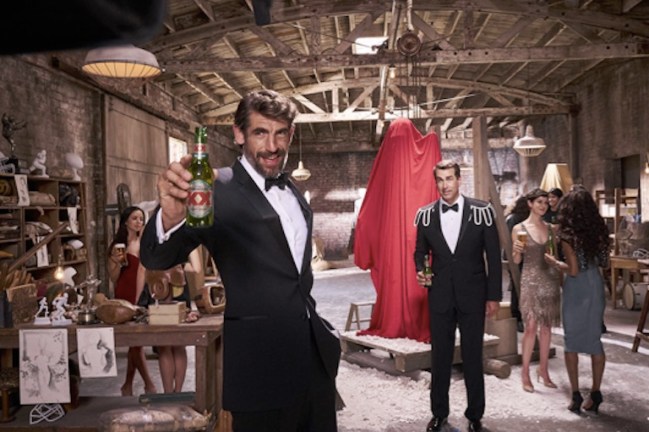