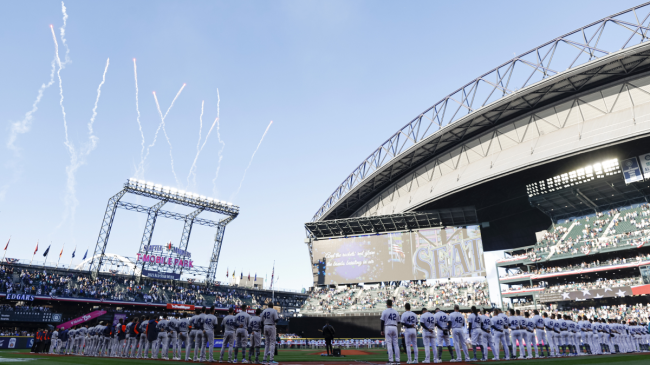 A couple of former teammates had a National Anthem standoff before the Mariners-Royals game on Sunday afternoon. Luke Weaver and Robbie Ray stood toe to toe in front of their dugouts, with neither player budging as the pregame festivities concluded.

Weaver and Ray played together in Arizona as members of the Diamondbacks. Now, the find themselves in the American League with Seattle and Kansas City, respectively.

The two friends decided to have some fun before taking the field as foes on Sunday.

Mariners and Royals players lined the diamond for the National Anthem, but once the tune ended, Ray and Weaver remained on the field. Neither one was going to blink in this standoff, which caused the umpiring crew to get involved.

Unfortunately, the friendly competition would end their day before it ever got started.

Umpires ejected Ray and Weaver for halting the start of the game. While neither of the starting pitchers were expected to see action in Sunday’s contest, the punishment does seem a bit excessive for the crime.

This fan said, “The amount of power tripping that goes on in MLB is actually insane,” noting that action didn’t deserve a removal from the game.

A couple of others wrote about the umpires being against fun with one fan writing, “Let them have fun, the season’s literally over.” We’re just two weeks away from the conclusion of the MLB campaign.

Another person commented, “Umpires are against fun,” which seems to be a theme that rears its head year after year.

Let them have fun season literally over

Umpires are against fun

Related: Ump show unfolds as Toronto coach is ejected before the game even starts