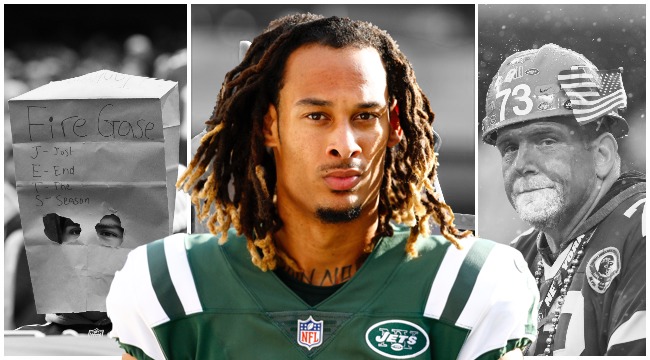 Stop me if you’ve heard this before, but the New York Jets had another repulsive season, with their 2-14 record marking the ninth season out of the last 10 that they franchise has failed to win more games than they’ve lost.

The losses are informed by a complete lack of organization direction, cycling through three different head coaches in the Trump presidency alone.

Sad Jets fans every playoffs for the past decade pic.twitter.com/QRTy7nOE9Y

Robby Anderson was sentenced to begin the first four years of his career in the Meadowlands before a higher power exercised mercy and sent him to Carolina, who also suck, but far less.

In an interview with the Charlotte Observer, the 27-year-old undrafted receiver described how the New York Jets culture nearly crushed his soul.

“It was times when I was in New York that I honestly, I just didn’t, I felt like I was losing my love for football. It was days I wouldn’t even want to go to the building like I didn’t like feeling like that … there was just a lot of things. I just wasn’t genuinely happy there all the time.

And in Carolina, it just felt like a new breath of air for me and I just (felt) at a real peace, I felt comfortable. Like I actually liked Charlotte. I was excited to go to work every day and get better and just enjoy even though things weren’t always 100% how we would want them to be, but I still was happy being there and still enjoyed it.”

Being a Jets fan is a sad life pic.twitter.com/9FubTpd2YC

In his first season with the Panthers, Anderson secured a team-high 95 receptions and career-high 1,096 receiving yards.

Seahawks safety and former Jets sufferer Jamal Adams had a similar experience with cursed franchise. He said on the “All Things Covered” podcast in November:

“Bro, I fought depression in New York. And I’m man enough to say it. I came home after a tough loss and just sat in my room in the dark — no phone, no TV. [My dad] hated to see me like that. It killed my pops so much. … He was calling my agent at the time and saying, ‘Hey man, I don’t like seeing my son like this. I need him out of this situation.’ It took a toll on my life outside of football.”

If the Jets offered me a job, I’m not sure I’d take it. And I’m already miserable.

Fireman Ed, how do you do it bro?