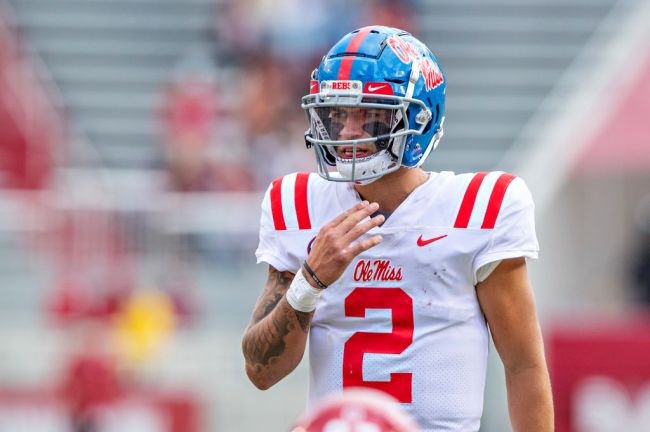 Ole Miss has emerged as one of the most popular sleeper teams to make some noise in the upcoming college football season, and rightfully so.

Lane Kiffin’s squad is going to put up a ton of points just as the Rebels did a year ago with Matt Corral under center. It’ll all come down to the defense making major improvements from last season for this team to really make that sizable stride most are expecting.

Robert Griffin III, who recently joined ESPN as an analyst, is one of the many folks out there that are extremely high on Ole Miss this season. The former Heisman Trophy winner didn’t hide how bullish he was on the Rebels as he predicted not only for them to make some noise in College Football Playoff discussions, but he also thinks Matt Corral is going to win the Heisman.

“I’m going with the most fun to watch gunslinger in all of college football: Matt Corral,” Griffin said. “I think he’s going to fix his turnover issues and he’s going to go out and lead Ole Miss to being a serious contender in the College Football Playoff. It’s not the safe pick, it’s not the trendy pick, but this guy’s exciting.”

He also noted Ole Miss is a team to watch for the College Football Playoff. @OleMissFB | @corral_matt pic.twitter.com/SWXhrePdV0

While Ole Miss fans will like what RG3 had to say about Corral and the Rebels, Kiffin surely won’t, he labels high-praise from the media as rat poison.

Ole Miss should start the season a perfect 3-0 before meeting up with Alabama in Tuscaloosa following a bye week for what could turn into being one of the most important games of the college football season.

Corral will put up numbers that will have him in Heisman discussions, but as Griffin III said, he’ll have to limit his turnovers and avoid games like last year when he threw six interceptions in a loss to Arkansas and five picks in a loss to LSU. Most importantly, Ole Miss will have to win games and pull off upsets along the way for Corral to actually have a shot at picking up some hardware.