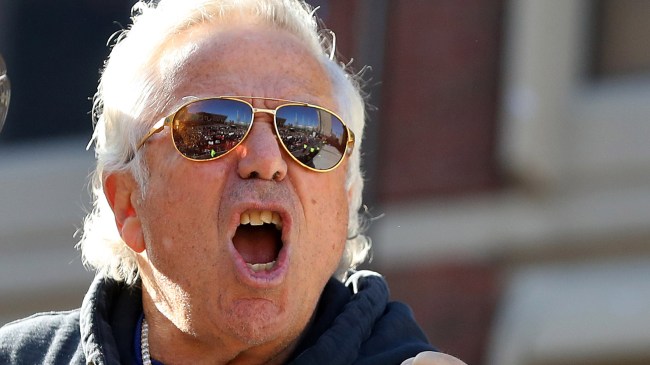 New England Patriots owner Robert Kraft is getting the best defense money can buy with regard to his alleged involvement in the Florida prostitution and human trafficking scandal.

In a recent interview with West Palm Beach NBC affiliate WPTV, Martin County Sheriff William Snyder stated that investigators in Florida are “just a little short” of being able to prove the human trafficking aspect of the case for which Kraft was charged.

And now, Robert Kraft’s attorney is going off on Sheriff Snyder in response to statements made in the interview.

“Sheriff Will Snyder admitted that there was no human trafficking,” Kraft’s lawyer William Burck told USA Today. “He lied about it. His officers lied about it. I don’t really know what to say. I’ve never seen anything quite like that before.”

“He’s trying to hide behind it by saying they didn’t find enough evidence,” Burck said. “You don’t get on a soapbox and start accusing people of being involved in human trafficking and then, weeks later, say ‘never mind’ and think that’s the way you can get away with that.

Sheriff Snyder isn’t backing down, however.

Reached Wednesday night, Snyder told USA TODAY Sports that he still believes this is a sex trafficking case — even if he can’t prove it currently. He also didn’t regret linking the men arrested to human/sex trafficking.

“Zero because it is sex trafficking,” said Snyder, who helped write Florida’s human trafficking laws as a member of the state’s House of Representatives. “There are several women lower down (in the alleged operation) that could still cooperate. Notwithstanding that, this has the makings of a classic, unadulterated sex trafficking ring. Period.”

Snyder also dropped this gem on Kraft and his attorney…

“They can get all the high-priced attorneys they want and scream and yell that the cops are the bad ones. But the cops weren’t the ones who were having … sex in the spas.”

In related news, New York Giants and Jets fans seem to really be enjoying themselves at the Orchids of Asia Day Spa down in Florida.

And then there’s this guy…