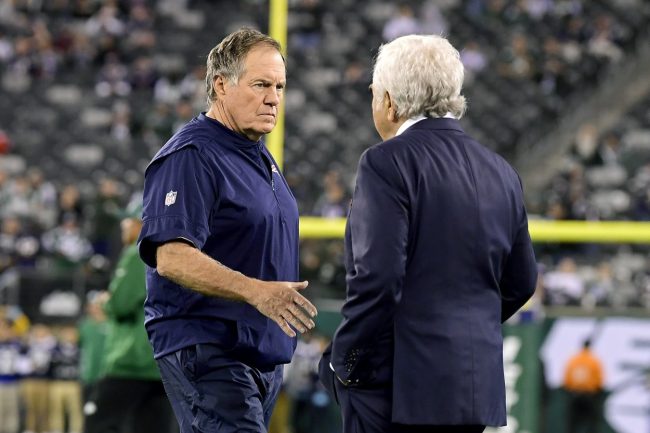 After the Buccaneers won a Super Bowl with Tom Brady in 2020, Patriots owner Robert Kraft apparently had some strong words for Bill Belichick. He let the New England head coach that he better win a Super Bowl without Brady.

During a recent appearance on the “I Am Athlete” podcast, former 17-year NFL veteran running back LeSean McCoy told a story about the time he ran into Kraft at a party. Of the things that he and the Patriots owner talked about, was Brady’s departure to Tampa Bay.

McCoy spoke about how of all of the players he has been around, of which there are many, Brady is the only player that can lead a team the way that he does.

“He can make the janitor feel better about himself,” he said.

While discussing the 4th of July party that he attended with Kraft, McCoy said that the Patriots’ owner had a drink or two. So when they got to talking, McCoy hit him with the tough question.

“How you let Tommy leave?!”

In response, McCoy said that Kraft was “mad” that Brady left and that he told Belichick that he let Brady win a championship with the Buccaneers, so it is time for him to win one.

McCoy then went on to say that he doesn’t see Belichick winning another Super Bowl again without Brady.

Here is the full story:

Another story from LeSean McCoy.

He was at a party with #Patriots owner Robert Kraft and actually asked him how come he let @TomBrady leave in 2020.

“That shit is dead” are strong words. Only time will tell if the 69-year-old head coach can get another ring like Brady did in Tampa.