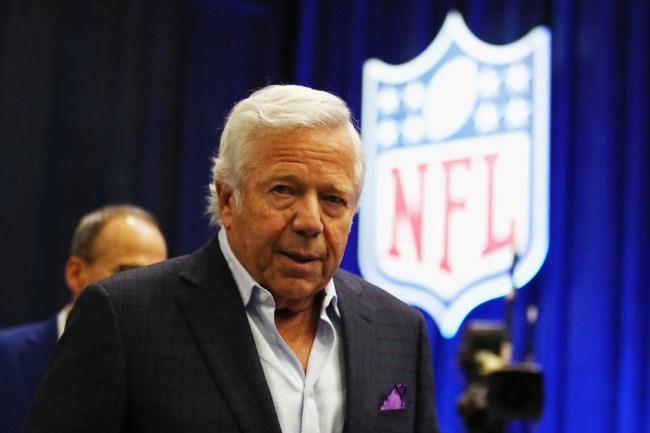 There is bad news for Robert Kraft, Florida prosecutors are now reportedly seeking felony charges against the New England Patriots owner in his prostitution case.

According to a new report by Florida’s Sun-Sentinel newspaper, state lawyers have filed a request to up the prostitution solicitation charges against Kraft from two misdemeanors to a third-degree felony. The felony is punishable by a five-year prison sentence. In March, the 78-year-old Kraft pleaded not guilty to the two misdemeanor charges in Palm Beach County.

On February 22, 2019, the police chief of Jupiter, Florida, announced the department’s sting operation, which included the Orchids of Asia Day Spa. The covert operation found that the Orchids of Asia Day Spa was also a brothel where sexual acts were exchanged for money. Some of the sex workers at the “spa” were reportedly women who were victims of human trafficking. However, the women did not cooperate with authorities to verify those claims.

Kraft’s lawyers argued that taking “continuous video recordings of private massages in which customers would be stripping naked as a matter of course” would violate customer privacy and his Fourth Amendment rights. Kraft’s attorneys called the surveillance “drastic, invasive” and called the operation far severe for police “investigating alleged offenses like prostitution.”

“That the State here is seeking to criminally prosecute one of its citizens — using evidence obtained during a dragnet video surveillance scheme that breaks from Fourth Amendment constraints agreed on by other courts — hardly entitles it to special dispensation or sympathy,” wrote Kraft’s lawyers Frank Shepherd and William Burck.

Since there were covert recordings of non-criminal massages, Palm Beach County Judge Leonard Hanser ruled that the warrant for the secret videotaping was invalid. The judge ruled police officers did not have a lawful “sneak-and-peek” warrant when surveillance cameras ran continuously for five days at Orchids of Asia Day Spa during the prostitution sting.

The ruling on the surveillance video was appealed and sent to the 4th District Court of Appeal in West Palm Beach. A three-judge panel will make a ruling. If the appeal is denied, there would be little chance that felony charges against Robert Kraft would stick.

On Friday, state lawyers filed a 15-page argument detailing why they needed such a broad surveillance operation. Their case stated that prostitution schemes often lead to more severe crimes.

Veteran defense attorney Jack Fleischman, who is not involved with the case, told the Sun-Sentinel that increasing misdemeanor charges to felony charges was unusual. “I literally have never seen that enhancement used in any county,” Fleischman told the publication. “It has to be rare.”

Robert Kraft has a net worth of $6.9 billion according to Forbes. The New England Patriots owner has won six NFL championships during his proprietorship of the NFL team that is worth $4.1 billion. If Kraft is convicted of a crime, he may face the consequences from Roger Goodell and the NFL.