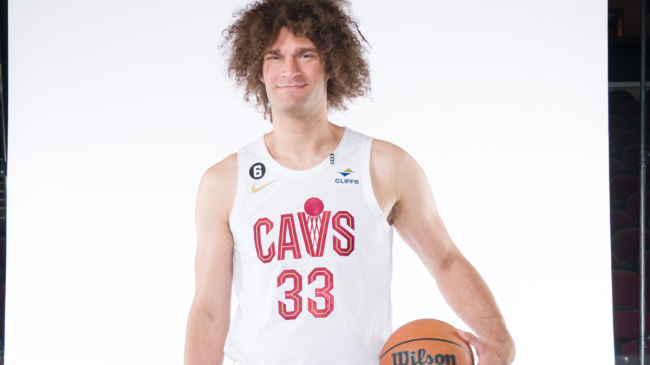 Robin Lopez is gearing up for his first season in Cleveland. The 14-year NBA veteran was picked up by the Cavs this offseason after spending last year in Orlando.

He’s always had a unique look dating back to his time at Stanford. Lopez has rocked that patented mini afro the majority of his playing days, and on Monday, he officially introduced that look to the Cavs.

The team held its Media Day event this week, which involved a photo shoot for players. When asked to “do something natural,” the center struck a box out pose as if he was about to pull down a rebound.

Unfortunately, he came out looking more like a caveman than an NBA all-star and the sports world is absolutely losing it.

Robin Lopez’s photo shoot pictures are now going viral on social media as his caveman look had everyone talking online. Check out the immediate reaction on Twitter.

A number of NBA fans noted the similarities to the old GEICO commercials, saying, “It’s so easy, a caveman can do it.” The resemblance is striking.

Ain’t this dude from the GEICO commercials? https://t.co/WYmeYXZ8yl

Others commented on the nomadic appearance, with one poster writing, “Finally, a clear picture of Sasquatch.”

This fan joked, “He look like he just discovered fire,” while another replied, “Looks like he was fighting a sabretooth tiger and got zapped into the future somehow.”

looks like he was fighting a sabre tooth tiger and got zapped into the future somehow https://t.co/fKPDFbMpI7

Lopez averaged just over seven points a game last season with the Magic. He’ll look to make an impact on a Cleveland team that’s suddenly become a playoff contender with the addition of Donovan Mitchell.

Hopefully, this look stays with him.