Houston Rockets Source Claims Team Was Shocked At How Much Carmelo Anthony Struggled In Their Defensive Scheme, Would Have Been Better Off ‘Just Not Playing’ 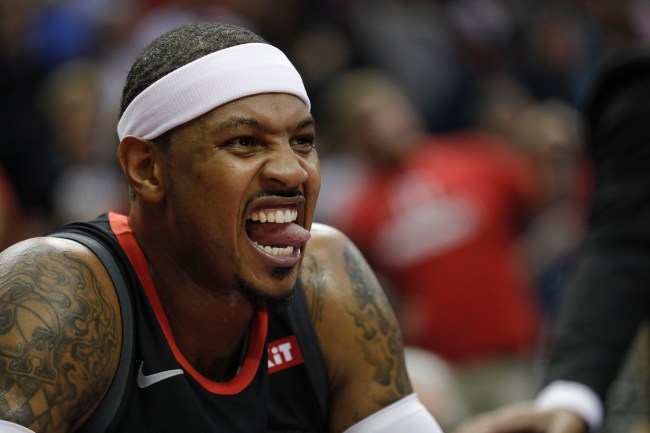 With each passing day, it’s becoming less and less likely that Carmelo Anthony will receive the season-long farewell tour he witnessed his friend and 2003 Draft-mate Dwyane Wade relish in a season ago.

The Rockets released the eventual Hall of Famer unceremoniously after just 10 games last season, and a recent deep dive by ESPN’s Baxter Holmes lends credence to the idea that the only competitive basketball the 10-time All Star will play going forward is for his Instagram followers inside the walls of the famed Lifetime Athletic Sky court in New York’s Hell’s Kitchen.

In Holmes’ piece titled The Burnout of the Shooting Star Carmelo Anthony, he speaks with sources inside the Rockets organization who all came to the same conclusion: the 35-year-old simply “just can’t play NBA defense anymore.”

Team sources claim that Anthony’s struggles to adapt to the Rockets defensive schemes were apparent as early as training camp.

During training camp in Louisiana, though, another issue arises, one that some Rockets officials say they hadn’t fully grasped until they saw Melo on the court: The 34-year-old is struggling in the team’s defensive scheme, one that requires players to switch often on pick-and-roll action. (According to Second Spectrum data, the Rockets switched on 44% of screens last season, by far the highest in the NBA. The Warriors were second at 33%. No other team was above 25%.)

The NBA’s evolution into a three-point heavy league prompted teams to acquire long-range shooters while also adding pieces who can defend the perimeter. Carmelo is not built to deliver the latter.

One rival front-office executive notes that the league’s 3-point revolution makes it harder than ever to hide players who aren’t strong defenders. He’s talking about Carmelo Anthony — someone, he says, “who can’t defend, can’t close out, his feet are slow and he gets blown by.” More than ever, offensive teams will repeatedly target weak defenders in pick-and-roll actions, the executive adds.

Although the Rockets knew of Anthony’s defensive problems prior to his signings, one team source revealed they had no idea how bad it’d be: “He really, really struggled with it.”

The Rockets source expressed deep regret for the lack of foresight in understanding how poorly Carmelo would fit and his subsequent release from the team after a cup of coffee.

“I feel awful that it ended the way it did,” the source said. “He would have been better off either going to Miami or just not playing. But those 10 games … basically ruined him.”

At 35, Anthony has gone on the record saying, he’d be “at peace” if he never suited up in the NBA again, but a former teammate over multiple seasons claims that’s just lip service, saying: “He doesn’t want to go out like this.”