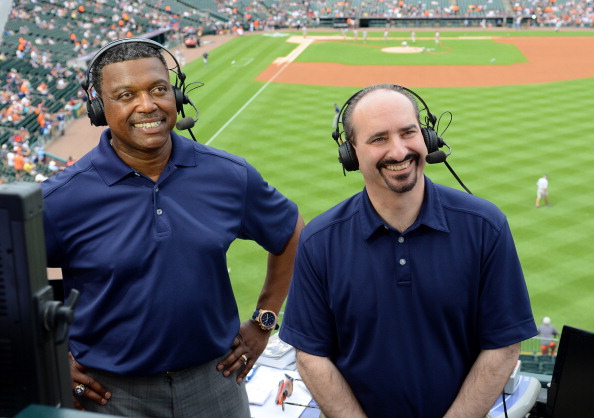 There’s some drama in the Tigers broadcast booth.

Yesterday it was reported that veteran Tigers broadcasters Rod Allen and Mario Impemba were forced to take a night off after they were involved in a physical altercation.

Multiple sources told The Athletic that neither Impemba nor Allen were part of Wednesday’s broadcast due to a physical altercation between the two television personalities following Tuesday’s game in Chicago against the White Sox. It is not immediately clear what prompted the attack.

According to the accounts of those sources, there has been simmering tension between both Impemba and Allen and the clash of personalities ultimately boiled over on Tuesday night.

Apparently there had been some bad blood brewing between the two for some time now.

According to Local 4 Detroit Allen choked Impemba after the two had a disagreement over a chair.

Sources told Local 4 that Impemba left the broadcast booth at some point and Allen followed, assaulting Impemba from behind and choking him.

The altercation was because of a disagreement over a chair in the booth, sources told Local 4.

Rod Allen broke his silence on Twitter on Wednesday by saying that he wasn’t going to comment on the fight because it was a “personnel matter”.

I’ve always conducted myself as an honorable professional and I always will. Because this is a personnel matter. I can’t comment right now.

As a fan, this is very upsetting. Good seasons. Bad seasons. Seasons full of potential & some where you just go along for the ride…We're all supposed to be in this TOGETHER. I'm hoping the best for everyone involved, but right now, I'm just sad. #TIGERS @tigers

Rod, I personally would have went with a half Nelson as opposed to the choke hold. But to each is own

I'm a fan of you both and have enjoyed your commentary. Ive had the privilege to meet the both of you on several occasions in Minneapolis. I'm sorry to hear about this incident. I was a fan of both before, I will remain one after.