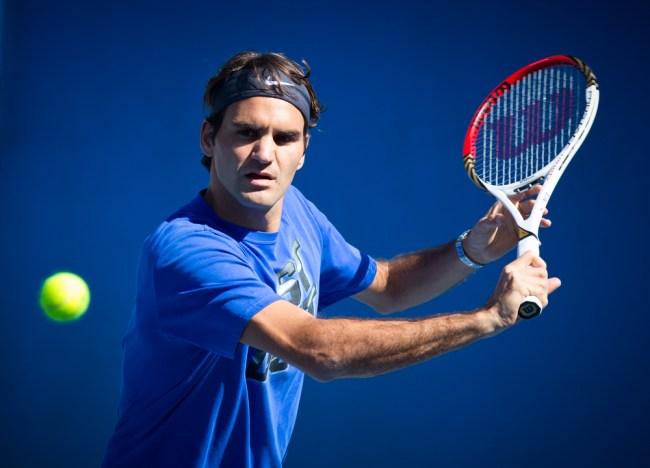 You’d think that Roger Federer‘s accomplishments would’ve dominated the entire news cycle surrounding the 2018 Australian Open but you’d be wrong. There was also a lot of chatter about Rafael Nadal’s wardrobe. Rafa showed up in Australia with his sleeves cut off. Sun’s out, gun’s out, right? That’s how Rafael Nadal rolls. And the local media weren’t quite sure what to make of it.

Roger Federer was asked about Rafael Nadal’s sleeveless shirt and if he’d ever go sleeveless on the court himself. Federer said he’s never go sleeveless, and he gave a pretty reasonable answer for why he’d never let the guns out in public. If you’ve ever grappled with being too skinny then you can finally identify with Roger Federer who apparently also has issues with his tiny muscles. Here’s what he told The Guardian:

Jim Courier asks Federer: Will you ever go sleeveless like Rafa? “That’s not gonna happen. You know why? My arms are not like his arms. It’s pretty simple.”
Fed then explains that he once tried the capri trousers that became Nadal’s trademark. (via)

According to Business Insider, Federer then went on to say how much he ‘loves’ Rafael’s sleeveless look. Rafael Nadal exited the 2018 Australian Open with an injury, and Federer said the last thing he did before going to bed on Tuesday night (after Rafa’s injury) was to write Nadal a letter to make sure that he was okay.

So, the next time you want to buy a basketball jersey but are worried about your tiny noodle arms just remember that Roger Federer, the greatest men’s professional tennis player in history, also dwells on his lack of muscles.