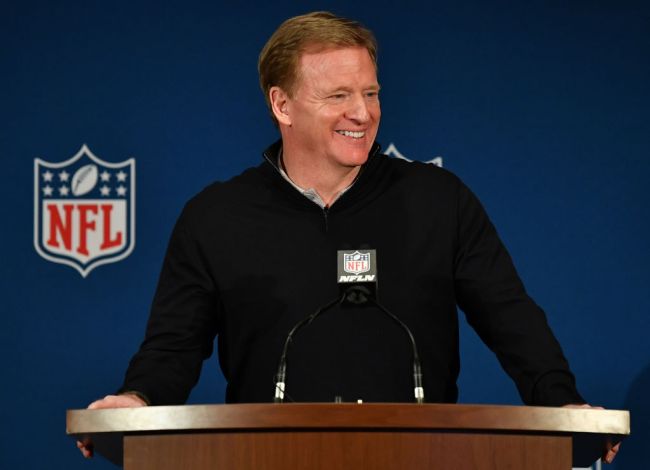 Roger Goodell has never played a snap in the NFL but he got paid more money in the past two years than any player in the league including Patrick Mahomes.

On Friday, the NY Times reported that Goodell has been paid $128 million in the last two fiscal years after receiving bonuses when the league secured several lucrative media contracts.

N.F.L. Commissioner Roger Goodell’s pay for the past two fiscal years totaled almost $128 million, bolstered by bonuses for helping the league’s owners clinch a new 10-year labor deal with the players and secure media contracts worth more than $100 billion over the next decade.

The nine-figure combination of salary, bonuses and other benefits made Goodell one of the highest-paid executives in the country, and the disclosure of the deal comes at a time when he has been criticized for his handling of numerous thorny issues, including the investigation into widespread workplace harassment at the Washington Football Team.

Goodell’s compensation was discussed at a two-day meeting of the league’s owners in Manhattan this week. During a session on Wednesday when only team owners were in attendance, a slide was shown listing the commissioner’s pay: $63,900,050 per year, or just under $128 million for the fiscal years 2019-20 and 2020-21.

Not only did Goodell make nearly $20 million more than Mahomes but the NFL commissioner is one of the highest-paid executives in the country and makes more per year than Netflix CEO Reed Hastings, who made $43 million last year.

Fans had some interesting reactions to learning how much money Goodell made.

I understand why he covers up everything because that's more than enough money to corrupt my limited moral too https://t.co/VjKcwFuBpx

$128 million is more than all but 24 NFL players have made in career salary. Just after Cam Newton, just before Tony Romo. And that's just two years for Goodell. @spotrac's list: https://t.co/VwSZ5cOEiH https://t.co/AB95PtIf9B

For perspective: This works out to about $2 per second. The federal minimum wage is $7.25 per hour. https://t.co/sgQF1OqaOm

TNF games are brutal on the body…injuries galore tonight… but how else is Goodell going to make $128M https://t.co/9J1GhyC9KF

I would screw over the players at every opportunity and steadfastly refuse to hand over derogatory information on owners no matter how terrible they acted for half of that. https://t.co/BKk68wLUYB