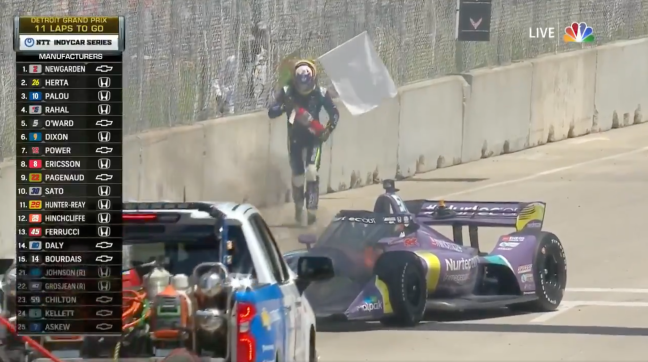 Romain Grosjean survived a horrible, fiery crash during last November’s Bahrain Grand Prix Formula One event. His car ripped in half and burst into flames. It was called a “miracle” that he was able to get up and walk away.

The Swiss-born driver was able to make it out alive but suffered severe burns in the wreck. On Sunday, early seven months later, Grosjean was caught up in another blaze.

This time, while he was racing in the Detroit Grand Prix Indy Car event, wasn’t nearly to the same extent. Nonetheless, flames are flames. At first, Grosjean ran from the scene. However, instead of keeping a safe distance, he grabbed a fire extinguisher and ran back to try and save the burning car.

WOW. Romain Grosjean – the man who walked out of fire last year – just ran back to his car on fire this time to try and put it out.

The IndyCar Series safety team intervened and pushed Grosjean out of the way, but he was lauded for his effort. Especially after going up in flames less than a year prior.

After the race, which he was unable to finish (obviously), Grosjean joked about the incident. He posted a photo on Instagram wearing a Detroit Fire Department shirt.

Grosjean considered retiring after his 2020 Formula One season came to a close with the frightening, flaming incident. However, instead of calling it a career, he decided to join the Indy Car circuit in 2021. His best finish to date came when he finished second after starting on the pole position in the GMR Grand Prix on the Indianapolis Motor Speedway road course in May.

For Grosjean to run back toward his car is crazy, but it’s a testament for how much he loves the sport.

“I care about my racing cars,” he tweeted after the race with a heart. There’s no denying that!